There is nothing, so we are told, quite like the appeal of a bad boy, which perhaps explains the affection Roma fans had for Radja Nainggolan.

From his wild hairstyles, smoking habit and penchant for parties, the Belgian's punk spirit, and undeniable talent on the pitch, created a special relationship with the Giallorossi faithful; he loved Roma, and Roma loved him.

In the summer, however, Nainggolan left for Inter Milan. The £20million fee, plus Davide Santon and a 19-year-old from the Nerazzurri Primavera who had yet to make a Serie A appearance, didn't ease the pain.

Roma fans felt duped. But six months on they have a new love; one who is younger and can do things the 30-year-old Belgian couldn't. Yes, you've guessed it, it's the 19-year-old who arrived at Roma to no fanfare in the summer.

So meet Nicolò Zaniolo: the teenager who has won Roma supporters' hearts.

“Inter didn’t want to sell him, they are not fools,” he said in December. “But they really wanted to sign Nainggolan so they had to adapt, to concede something to us. The deal, however, would have been finalized without Zaniolo, Inter weren’t obliged to sell him to us.”

Monchi also admitted Zaniolo wasn't expected to have a huge impact this season. The plan was to bed him in slowly, his development best served with the odd start here and there.

Instead, he has been constantly fast-tracked. At the start of September, he became only the fourth player to be called up to the Italy senior squad having not made a Serie A appearance. Later that month he was handed his debut for Roma, it came against Real Madrid at the Bernabéu.

That night Zaniolo impressed as part of a midfield three, a position his former youth coach at Inter, Stefano Vecchi, feels he is best suited to. “He has the characteristics to become a modern mezzala; he's a (Steven) Gerrard, (Frank) Lampard-type player,” he said in September.

Roma boss Eusebio Di Francesco evidently feels differently, and Zaniolo's next 16 appearances have come as a trequartista (an attacking midfielder).

It's a position in which the 19-year-old has flourished; one which allows him to blend his physicality – he stands 6ft 2ins – with his technical prowess. 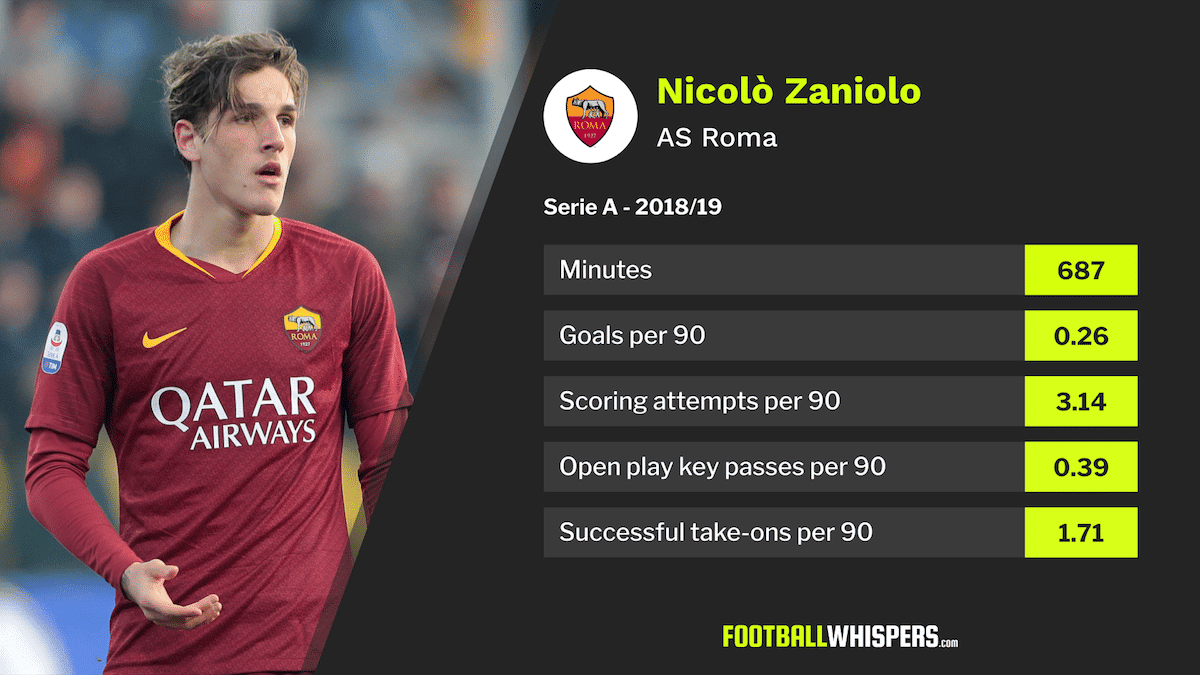 “Zaniolo plays like a veteran,” Roma legend Francesco Totti said after Roma's 2-2 draw against Inter earlier in the campaign, a game in which Zaniolo received a standing ovation from the home crowd for his display.

“He has explosive strength and technique, and everything it takes to become a truly great player. Don't let him hear me though. He may yet change course and I don't want that on my shoulders.”

Two weeks after his man-of-the-match display against Inter, Zaniolo scored his first Roma goal against Sassuolo. It was a sumptuous strike, one that was a hybrid of his physical and technical gifts. And, for good reason, it quickly went viral on social media.

It all started with a burst of acceleration down the right flank. Zaniolo is by no means the quickest but he sprints beyond the covering full-back to collect a pass from Cengiz Ünder, who is credited with a somewhat dubious assist. 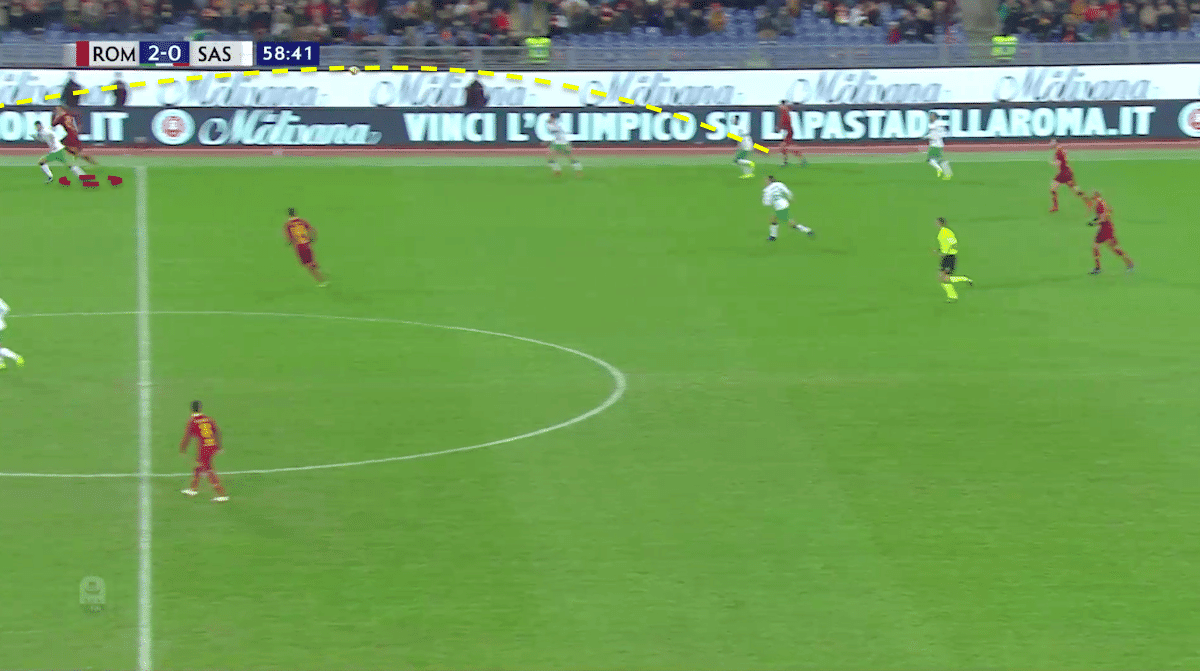 From then on it's all about Zaniolo's technique and composure. He breaks into the penalty area and chops the ball back onto his stronger left foot. 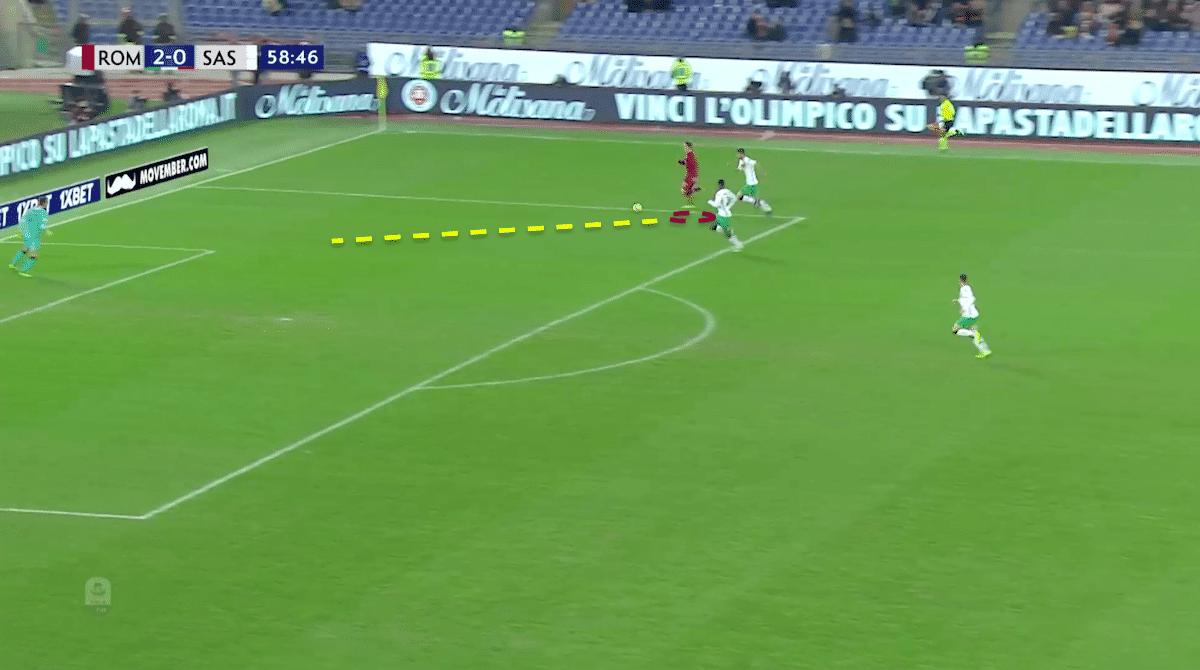 He feints to shoot, putting down the defender and the goalkeeper in the process.

The finish is then relatively straightforward. The Italian Under-21 international deftly lifts the ball over the embarrassed Sassuolo pair and heads off to the corner to celebrate. 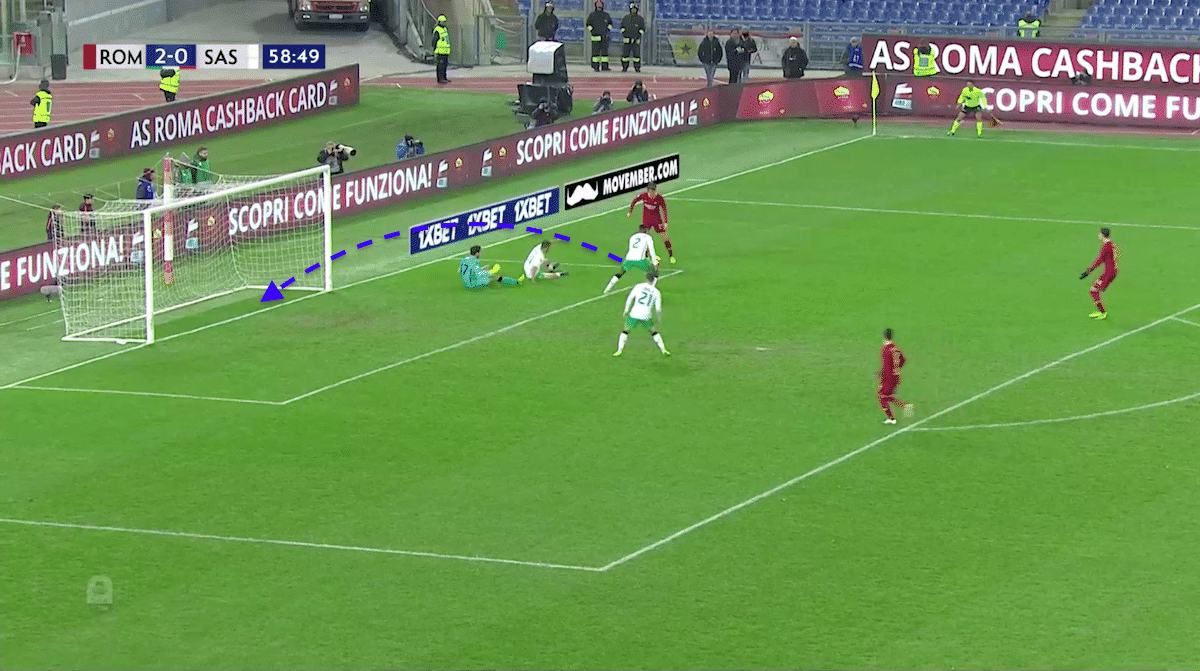 “I am so happy with the goal,” Zaniolo said in the post-match interview with Sky Italia, whose reporter pointed out it was a strike reminiscent of Totti.

The teenager was quick to shut down such a suggestion. “Comparing me to him is impossible,” he replied.

Yet if he continues to produce moments of magic in a Roma shirt, those comparisons are inevitable. And the No.10 worn by the Il Capitano remains free…

However, much like Totti had in his heyday, European giants are lining up to take Zaniolo away from the Stadio Olimpico. Arsenal and Juventus have been credited with interest while Real Madrid, who came closest to luring Totti away from Rome, are also keen.

“Market assessments are difficult to do as it’s the market that determines the price of a player. It depends on how many teams make enquiries, but we’ll have a clearer idea in the next few months,”  Stefano Castelnuovo, the player's agent, told Radio Sportiva.

A departure at this stage of his career is unlikely. That is partly because the fee Roma would demand for the youngster, who remember only has six months of senior football under his belt, would put off many sides. But also because Zaniolo receives wise counsel from his father, Igor, who enjoyed a long career in Serie B with Salernitana, Cosenza, Ternana and Messina.

“He is very grateful to Roma, a great team that gave him his first opportunity at high levels,” Igor told Tuttomercatoweb. “There’s only Roma in his head and he wants to continue like this.”

According to reports in Italy, the Serie A side are ready to offer the midfielder a new contract until 2024. They are desperate not to lose him, which for a club that has a history of selling their biggest stars is telling.

Roma are done with their bad boy phase. And in Zaniolo they clearly feel they have the right man to settle down with.