Salt Lake Stadium, Kolkata. More than 60,000 fans fill the arena. The heat of the day hasn't faded, the humidity only rising. And on the pitch, 22 teenagers are competing for the title of world champions.

It's the 2017 Under-17 World Cup final; England versus Spain, who have raced into a 2-0 lead after 30 minutes. Yet it's a lead built on fortune. The Young Lions are the better side. The next hour will prove that.

On the right of Spain's back four is Mateu Morey, an unquestionable talent. A quick, attacking full-back who joined Barcelona at the age of 15 and was courted by Bayern Munich at 17.

But he is being beaten time and time again by a skilful, quick and powerful winger. A winger who will go on to create two of England's five goals and have a key role in a third.

His display is exceptional. And one prominent social media account which focuses on Barcelona's famed La Masia academy posts during the second half: “Hudson-Odoi is having the game of his life.”

The reality is this performance is what many have come to expect from Hudson-Odoi. The Chelsea youngster is a match-winner. A game-changer. A prodigious talent.

Fast forward 14 months to the present day and the secret, if there can be such a thing in modern-day football, is well and truly out. The 18-year-old is a member of the Chelsea first-team squad and has made ten appearances for the club he joined at the age of eight.

But how much longer the Premier League club will reap the benefits of the coaching Hudson-Odoi has received at Cobham over the last decade is a matter of speculation.

He has just 18 months remaining on his contract and, with his game time at Stamford Bridge limited, Europe's biggest clubs are circling. Bayern Munich have had several bids – the last of which was reportedly as high as £30million – turned down. Real Madrid, Barcelona, Juventus and many more are also interested.

“We certainly value him as a player,” Chelsea assistant coach and club legend Gianfranco Zola insists “It's about patience. I believe he has a bright future with us. I know Bayern is very interested in him, but we're interested in him as well.”

The list of suitors highlights how highly regarded Hudson-Odoi is across Europe. And if he were to depart, it would be a crushing blow to Chelsea and another major failure by the club to integrate academy graduates into their side on a consistent basis.

What is certain, however, is either at Stamford Bridge or further afield, 2019 is going to be a big year for the teenager from Wandsworth.

Even before Hudson-Odoi celebrated his 17th birthday, it was clear he'd risen above youth team football.

His schoolboy campaign, the 2016/17 season, is regarded as one of the most memorable in Chelsea's academy history. He broke into the Under-18s as a 15-year-old and soon was a mainstay of the side which clinched the FA Youth Cup and Under-18 Premier League.

He followed that up with World Cup success with England – achieved while still only 16 – and trained with the first-team regularly. But Antonio Conte wasn't ready to throw Hudson-Odoi into his side, or match-day squad.

It meant that the winger would continue to sharpen his skills in the Under-18s. And that meant young defenders finding out firsthand that Chelsea possessed a special talent.

Hudson-Odoi eventually made his first-team bow on January 31, 2018. Introduced as a substitute in a 3-0 defeat at home to Bournemouth, he became the second-youngest player to make his Premier League debut for Chelsea, aged just 17 years and 43 days.

It wasn't until this summer, though, that CHO, as he's been nicknamed by Blues fans, established himself in the first-team squad. He impressed in pre-season, namely against Arsenal, a game in which he tormented Hector Bellerin, and then in the Community Shield against Manchester City.

“He will be a very, very strong player,” Conte's replacement, Maurizio Sarri, said after the curtain raiser at Wembley.  “Will he be in the first team squad? I think so. He will be staying with us for all the season.”

Somewhat harshly, he's only featured once in the Premier League under Sarri at the time of writing. But in the Europa League, he has made four appearances, completing 90 minutes twice.

And his performance against Greek side PAOK, who were admittedly reduced to ten men after just seven minutes, certainly whetted the appetite of Chelsea fans.

Hudson-Odoi scored once and created another in the 4-0 win. Yet what stood out was how he can make an impact either on the right or left side of a front three.

His first senior goal was a replica of many he scored for the Under-18s. 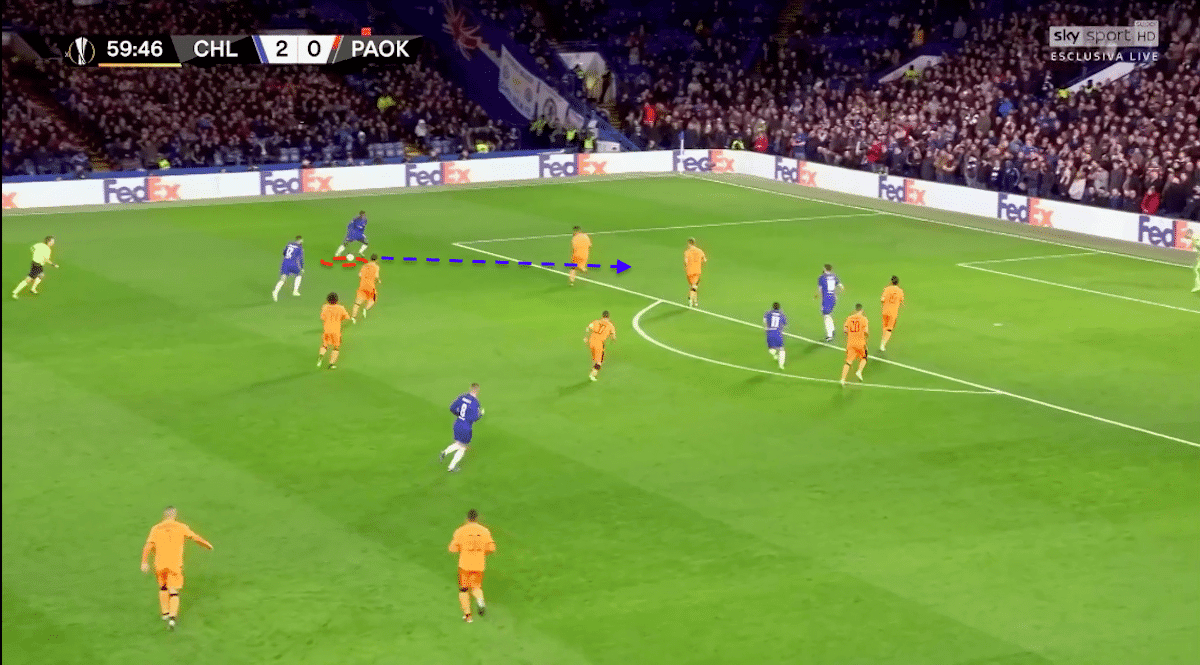 He received a pass on the left of the penalty area, moved into the 18-yard box and shaped to shoot into the far corner. Yet, at the last moment, wrapped his foot around the ball and fired into the near post. 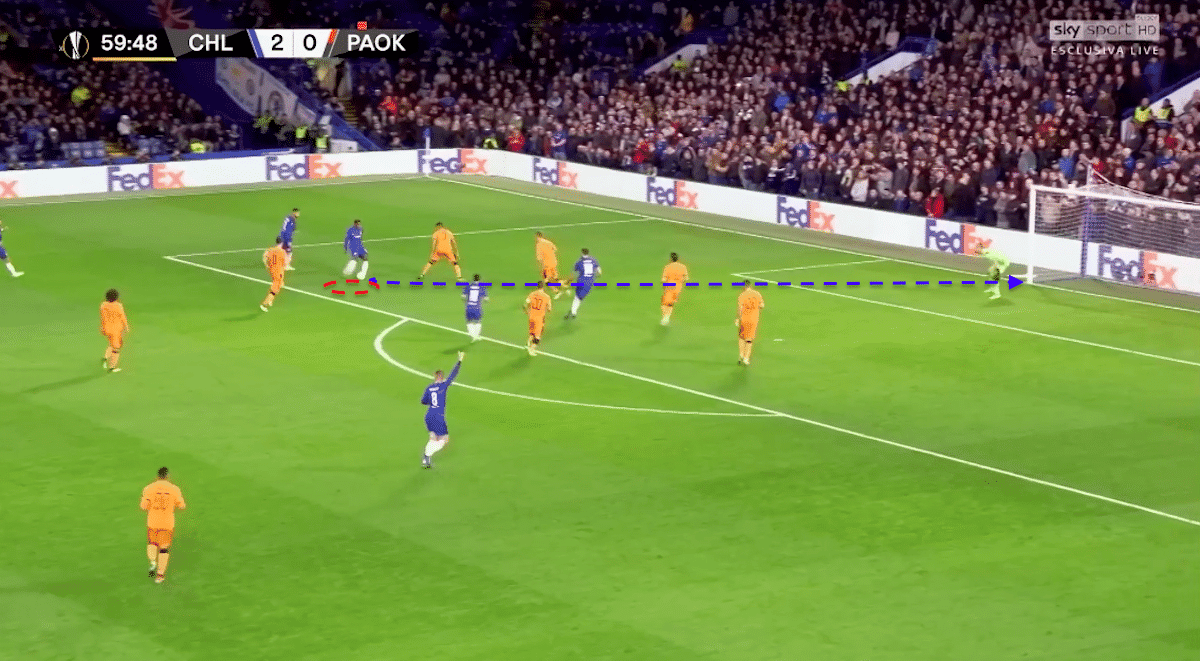 For the final 20 minutes of the victory, Hudson-Odoi was moved out to the right side of the attack.

He is undoubtedly stronger coming in off the left but is up against Eden Hazard for that spot in the side. So he displayed the poise and precision to his game that makes him a viable alternative to Willian and Pedro. 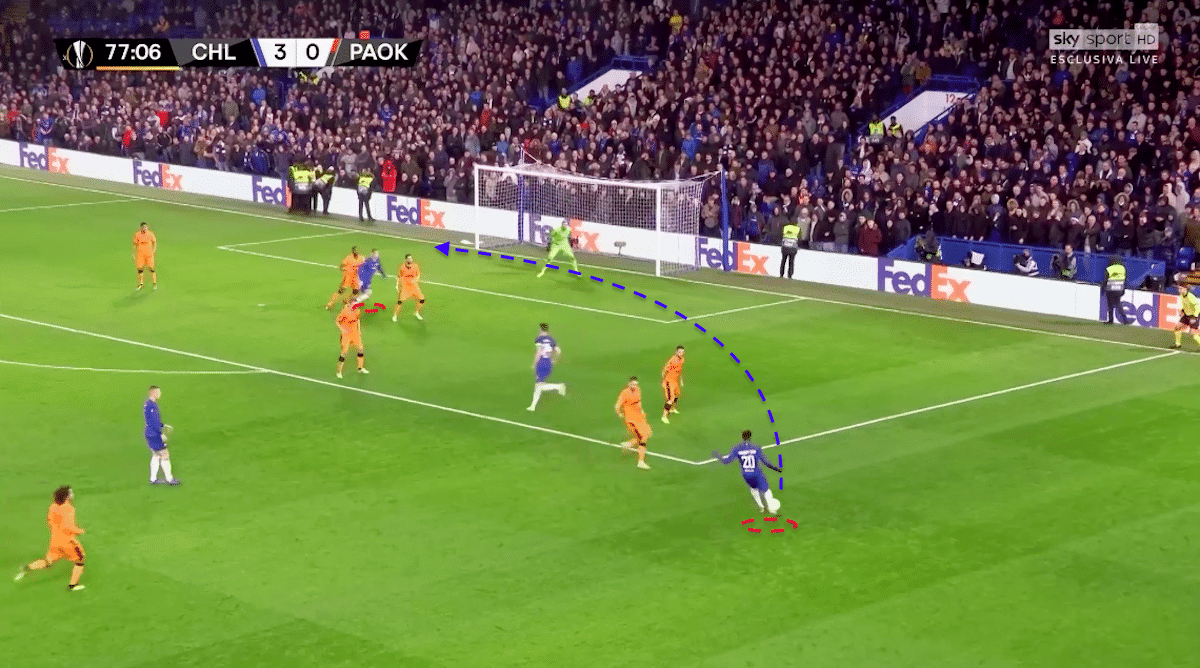 Hudson-Odoi picked up the ball from Gary Cahill, looked up and spotted Àlvaro Morata in between the two centre-backs. It's not an easy pass but the accuracy and pace on the cross is perfect for the Spaniard to head home. 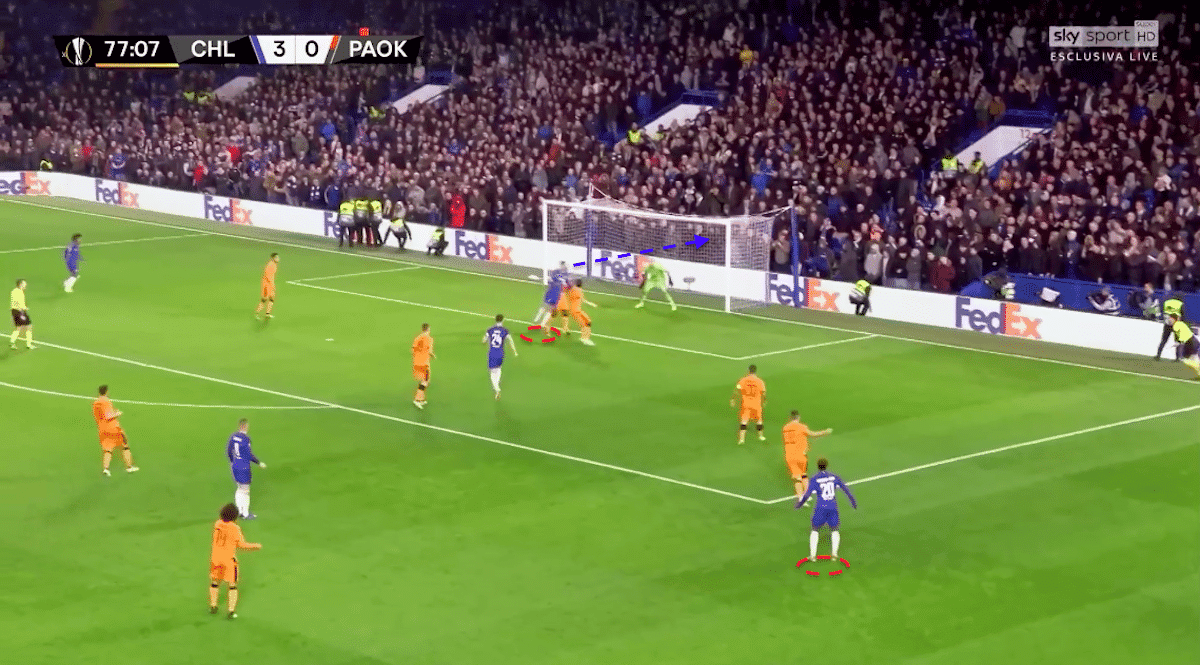 The above are (so far) Hudson-Odoi's two standout moments in a Chelsea shirt. They display his technique and intelligence, pace and power.

And impressively, despite having only played 215 minutes of Europa League action, he is second among attackers for successful take-ons (14) and eighth for open play key passes (8). The fact he's only been dispossessed six times also highlights he knows there is a time to dribble and a time to play the simple pass.

It all paints a picture of a future star. And so the big question isn't whether Hudson-Odoi will make it to the top, it's where he will do it. Chelsea, and the club's fans, desperately hope it will be Stamford Bridge. We'll find out in the next six months if the winger feels the same.