3. Bundesliga side TSV 1860 Munich take on the challenge of Karlsruhe SV for progress in the DFB Pokal. Both sides are on unbeaten streaks which will come to a conclusion for one of the challengers.

The DFB Pokal is famous for upsets and we expect to see one in this meeting. Karlsruhe are a division senior to 1860 Munich but should find their cup journey come to a halt in this meeting. The Lions have won four matches in succession, including a 3-1 triumph over Hansa Rostock, Karlsruhe's peers in the 2. Bundesliga. They have only conceded two goals in their last three competitive outings and their defence should hold up against their rivals.

We have to go back to mid of September for the last time 1860 Munich drew a blank in a competitive outing. They have scored against all and sundry and will be comfortable against their much-fancied rivals. Karlsruhe are in a similar company, their last shutout coming in a goalless draw against Werder Bremen in August. With both the Lions and KSC hitting the back of the net with ease, this match should see goals at either end of the pitch.

1860 Munich vs Karlsruhe: Check out the best odds and the latest stats

1860 Munich vs Karlsruhe: Check out the team lineups

With four wins on their backs, Michael Köllner will be pleased with his charges. They have laid waste to all and sundry but will be aware they still have a long way to go. The chief threat to their ambitions comes from Karlsruhe and it remains to be seen how they tackle with them at Grünwalder Stadium.

Christian Eichner will be wary of 1860 Munich's threat. The Lions' winning stretch gives them the confidence that is missing in Karlsruhe. Add to the fact that KSC has struggled on the road in 2. Bundesliga and the mixtures for this meeting get complicated. However, they do ply their trade a division above and should make their superiority count.

Questions About 1860 Munich vs Karlsruhe 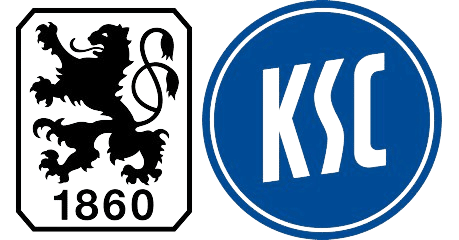 Where is the game being televised? Sky Sport (Germany).