Twenty-four of Europe’s top national sides landed in France in high spirits but, after a fortnight of intense drama, the eight worst outfits have all been sent packing. And that can only mean one thing: the knockout stages have arrived!

That’s not to suggest that the group phase hasn’t been brilliant. After 36 matches, fans have been treated to the rollercoaster of emotions that only a major tournament could bring. There’s been thrill, spills, and plenty of skills along the way; here are our 11 favourite moments from Euro 2016 so far.

Germany’s group campaign can be summed up in word: efficient. The world champions picked up seven points to win Group C without ever leaving second gear, and kept three shutouts in the process. However, were it not for Jerome Boeteng’s quick thinking, their perfect defensive record wouldn’t have lasted the first 45 minutes.

At 1-0, Ukraine’s Yevhen Konopllyanka hit a fierce cross come shot from the left side of the box, only to hit Boeteng’s midrift. With the ball heading towards the empty net, the Bayern Munich defender somehow readjusted himself to make a sublime goalline clearance to keep Germany ahead.

Football isn’t all about scoring, and this was defending at its very best. 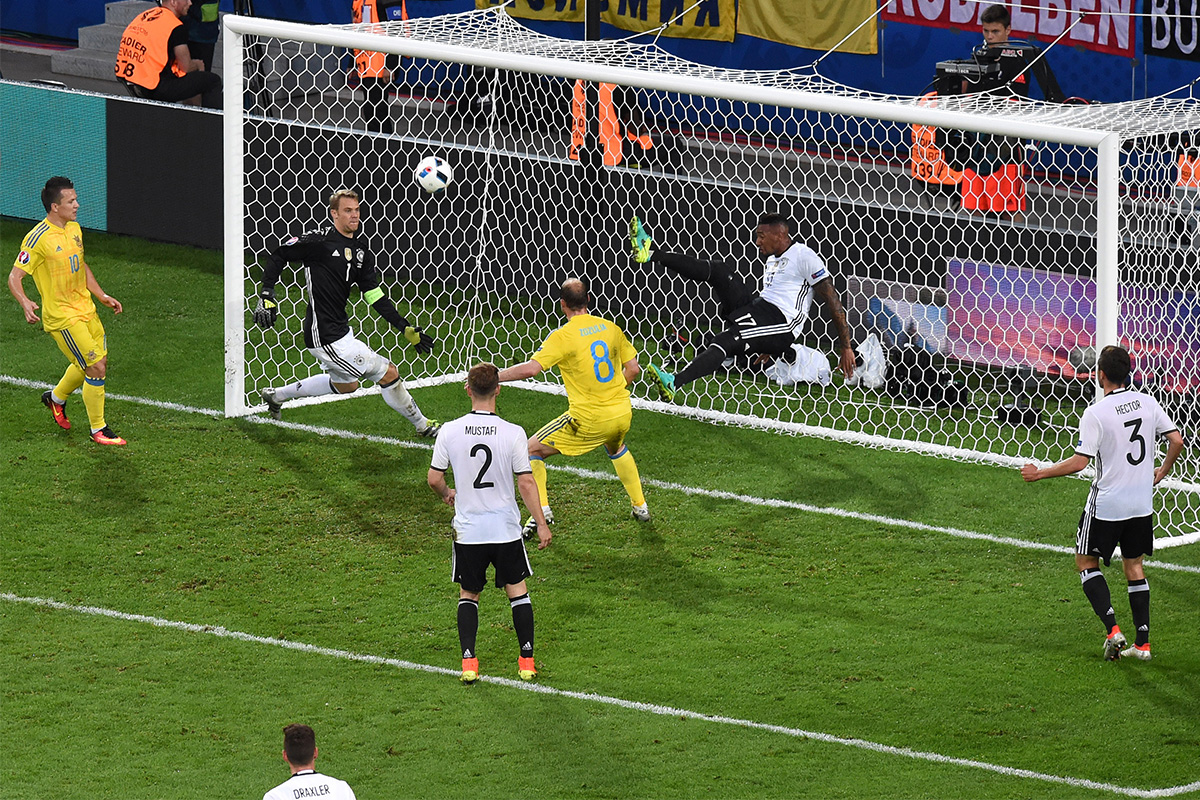 The opening night is always a strange affair, and this year’s event was no different. Host nation France were widely expected to begin their home tournament with a routine win over Romania. While they did eventually seal the points, Les Bleus were made to be patient; but boy was it worth the wait!

With injury time looming, it appeared that Didier Deschamps and his players would have to settle for a point after Bogdan Stancu’s spot kick had cancelled out Olivier Giroud’s opener. However, Dimitri Payet unleashed a thunderbolt from outside the box on his weaker left foot to win the game and send the Stade de France into a state of euphoria.

France, Romania, and the whole of Europe now understands; Euro 2016 was up and running in style. 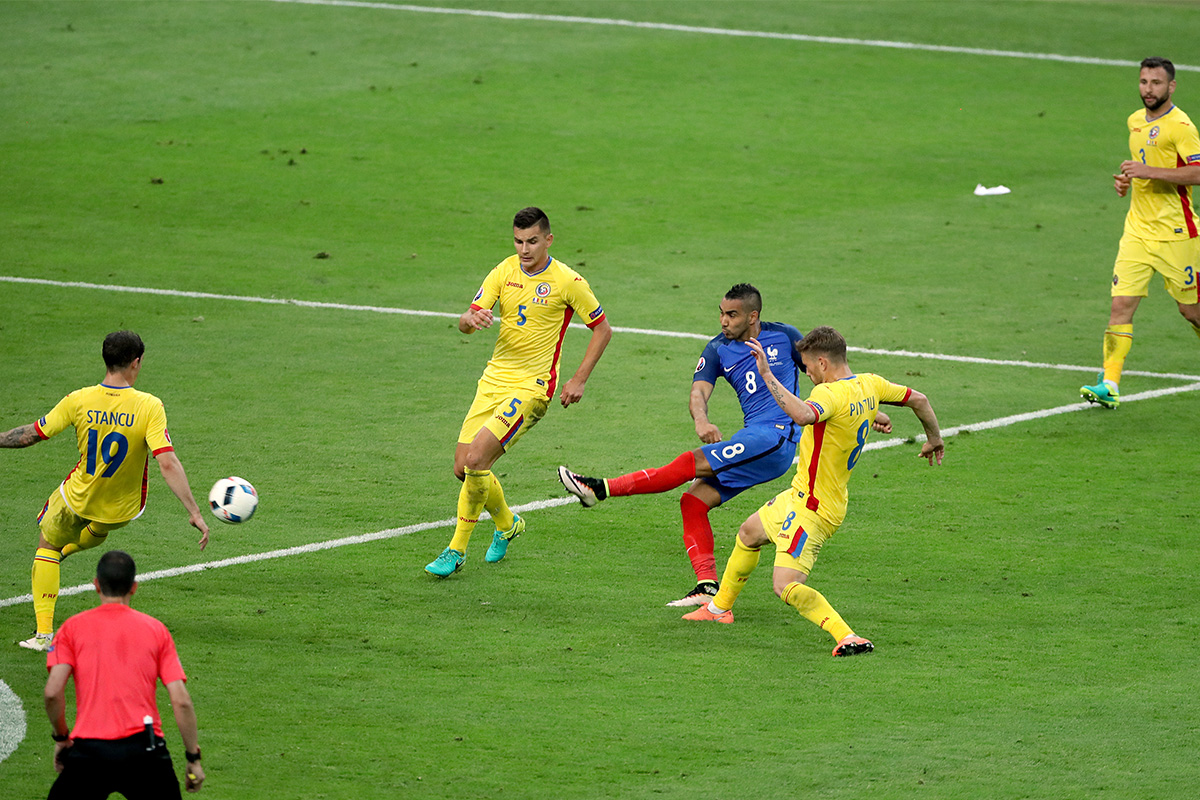 Write off the Italians at your peril. A decade ago, in the wake of Calciopoli, nobody expected much from the Azzurri before they went on to win the World Cup in Germany. Fast-forward to 2016 and the Italian fans and media had pretty much dismissed their chances in France before a ball had even been kicked; that soon changed after their masterclass against Belgium.

Antonio Conte’s side were perfect from start to finish, shutting out the world’s second ranked side with minimal effort. They were equally clinical in the attacking third too, with Emanuele Giaccherini latching onto a sublime Leonardo Bonucci pass for the opener. Graziano Pelle’s late strike doubled the lead, providing a fitting end to a stereotypically disciplined Italian performance.

Belgium quickly made amends, however, with a far better performance in their 3-0 drubbing of the republic of Ireland. 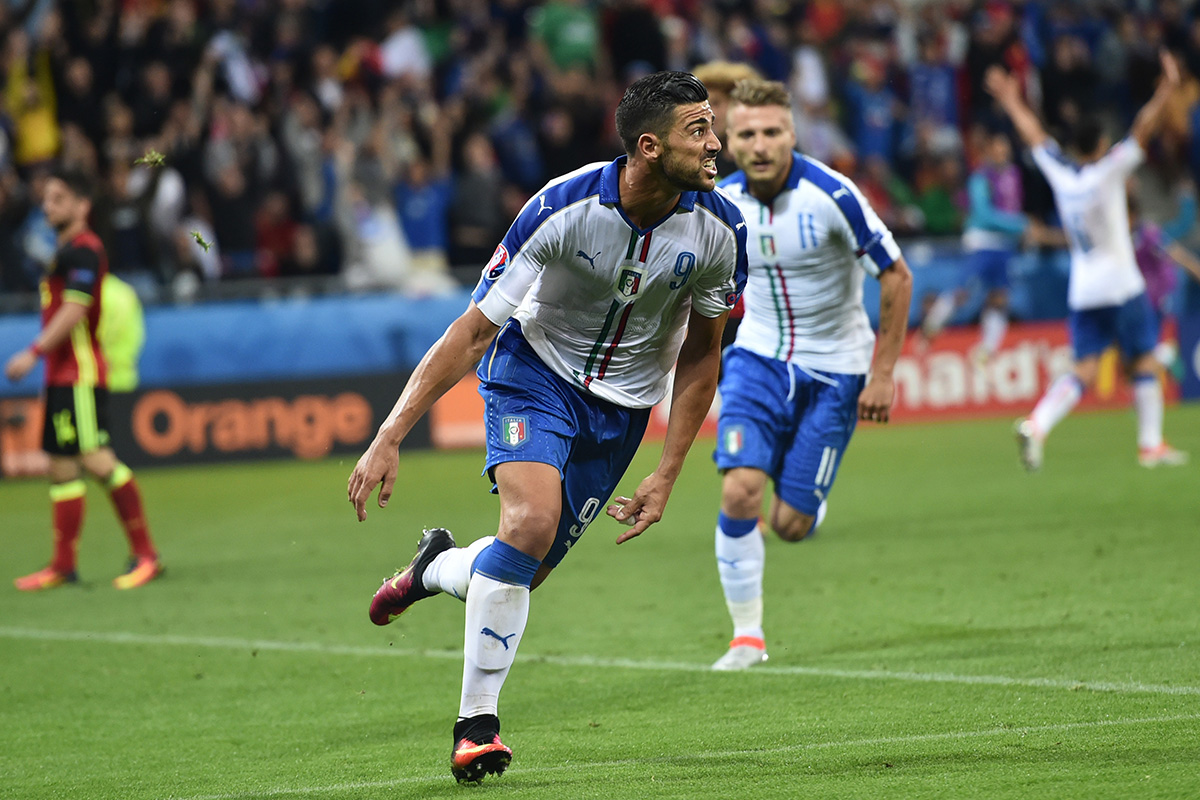 Group G was easily the most dramatic with shock results and entertaining football on offer throughout the six matches. And it served up the most breathtaking contest of the entire tournament so far too.

Despite often playing on the back foot, surprise package Hungary led three times thanks to Zoltan Gera’s opener and two heavily deflected Balazs Dzsudsak strikes. However, they were pegged back each time; firstly by a Cristiano Ronaldo-assisted Nani goal, and then two equally sublime finishes from the main man himself.

The final few minutes may have petered out, but this was easily the most enjoyable clash of the competition so far; let’s hope it sets the tone for the knockout stages ahead. 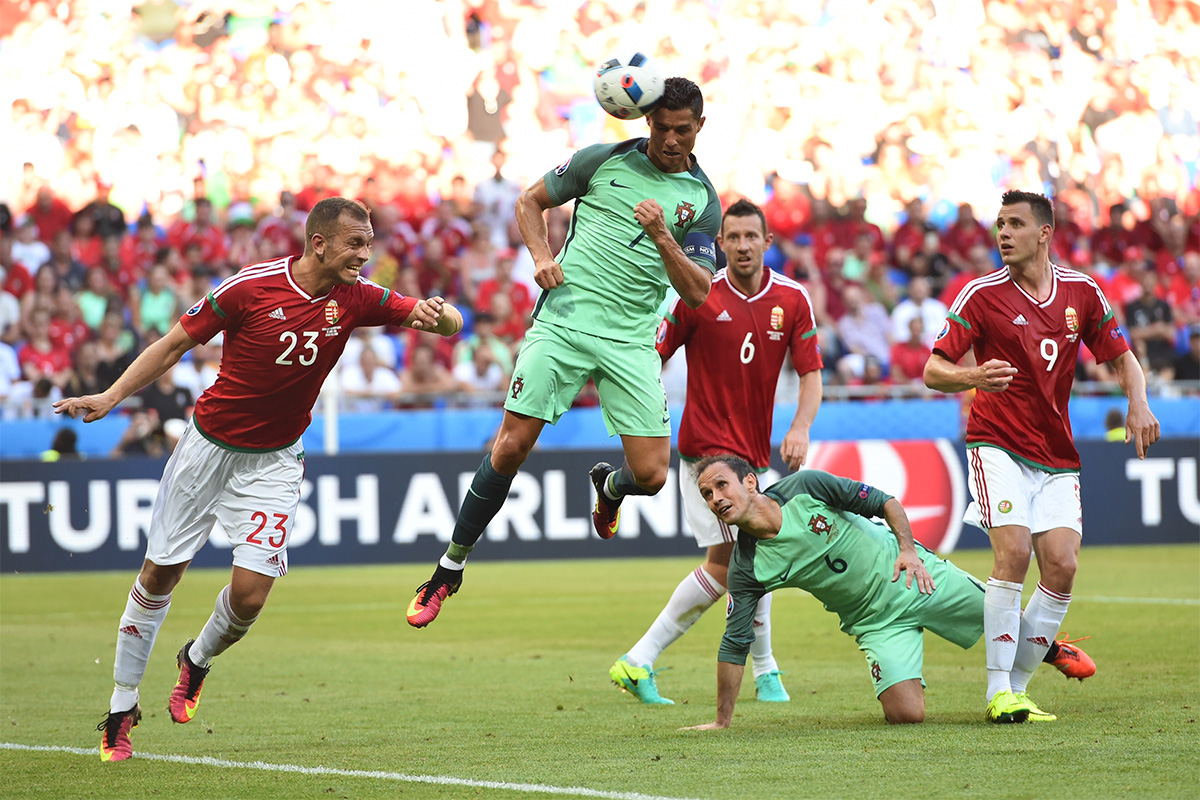 The great thing about seeing the best players on the biggest stage is that you’re guaranteed to see wonderful strikes. In terms of technique, they don’t come any better than Luka Modric’s sumptuous volley against Turkey.

Croatia dominated Fatih Terim’s side throughout their Group D opener, but required something special to break through a resolute Turkish defence: Modric provided it by meeting a lofted Turkey clearance with a simply stunning 25-yard volley.

Being a first-half strike, it didn’t match the drama of some of the group phase’s last-gasp goals. In fact, Croatian fans were probably more ecstatic about Ivan Perisic’s late winner against Spain. As far as sheer quality is concerned, though, Modric’s eclipses Payet’s as the best goal of the tournament so far. Pure magic. 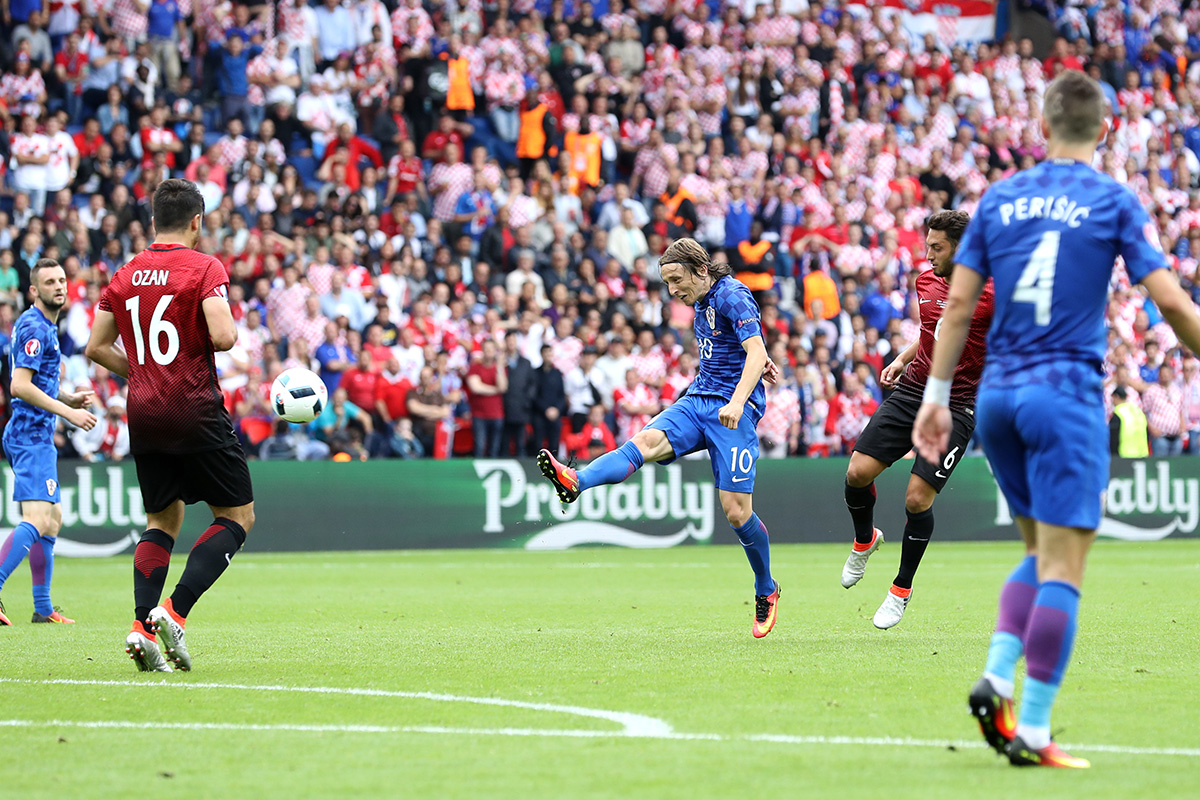 A win against Ukraine, following a narrow defeat to Poland, left Michael O’Neill’s men entering the final group game knowing that qualification for the round of 16 was still very much possible in their debut appearance at the Euros. However, with goal difference due to play a massive part, they were relying heavily on a respectable scoreline against the world champions.

Mario Gomez’s 30th minute left-footed strike could have opened the floodgates, but goalkeeper Micahel McGovern had other ideas. Germany couldn’t extend their advantage despite registering 29 shots on target. The woodwork did come to Northern Ireland’s rescue on a couple of occasions; nonetheless, this was mostly about the heroic custodian.

Norn Iron may have lost the battle but, thanks to McGovern, they won the war by sealing their place in the knockouts. If the recently out of contract goalkeeper was looking to put himself in the shop window, he certainly did it here. 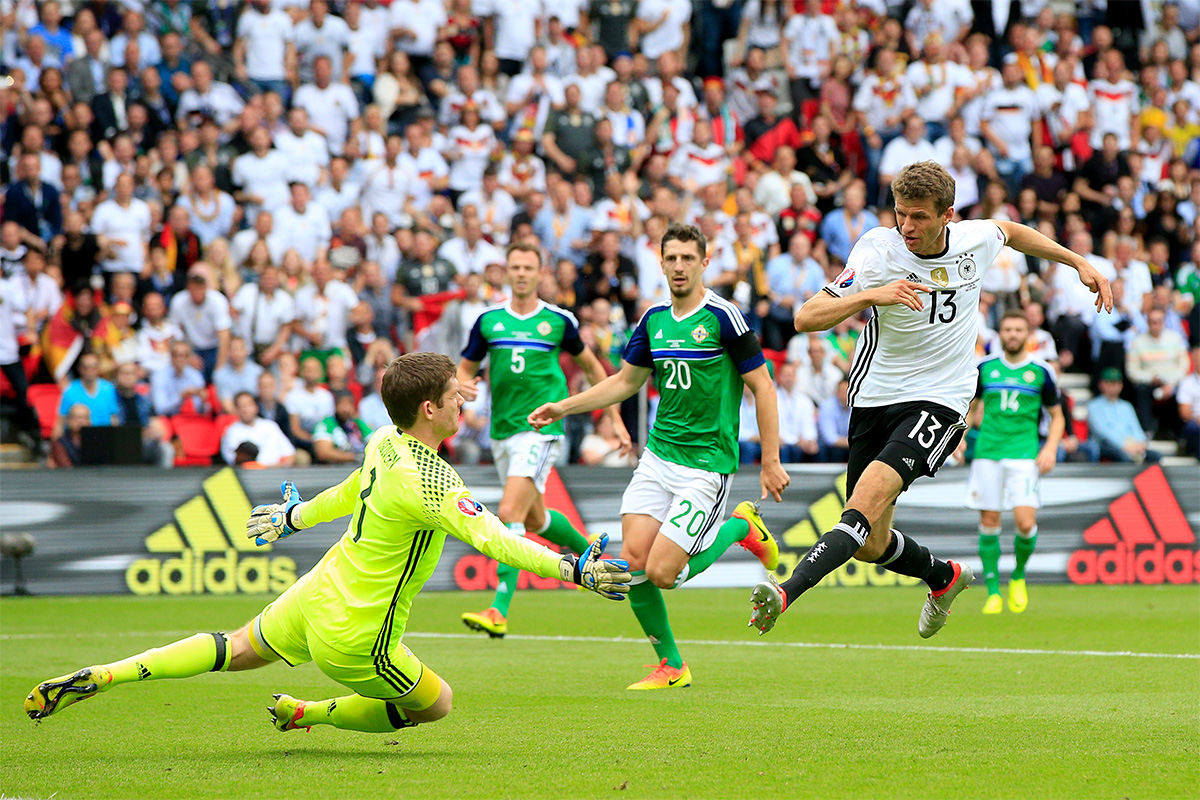 Vicente Del Bosque’s holders entered the tournament unbeaten since 2004 and remain the cream of the crop when it comes to delightful passing football. Those sentiments have been on show throughout the group phase, but were especially palpable in the 3-0 drubbing of Turkey.

The Spaniards dominated for 90 minutes. Their quality personified by the game’s second goal: no less than twenty-two passes were made in a move that ended with a trademark defence-splitting Andres Iniesta through ball to Jordi Alba, who duly squared for Alvaro Morata to finish. The beautiful game in all its stunning glory.

An already qualified Spain would see their unbeaten run ended by Croatia, though, leaving them in the far more difficult bottom half of the draw. 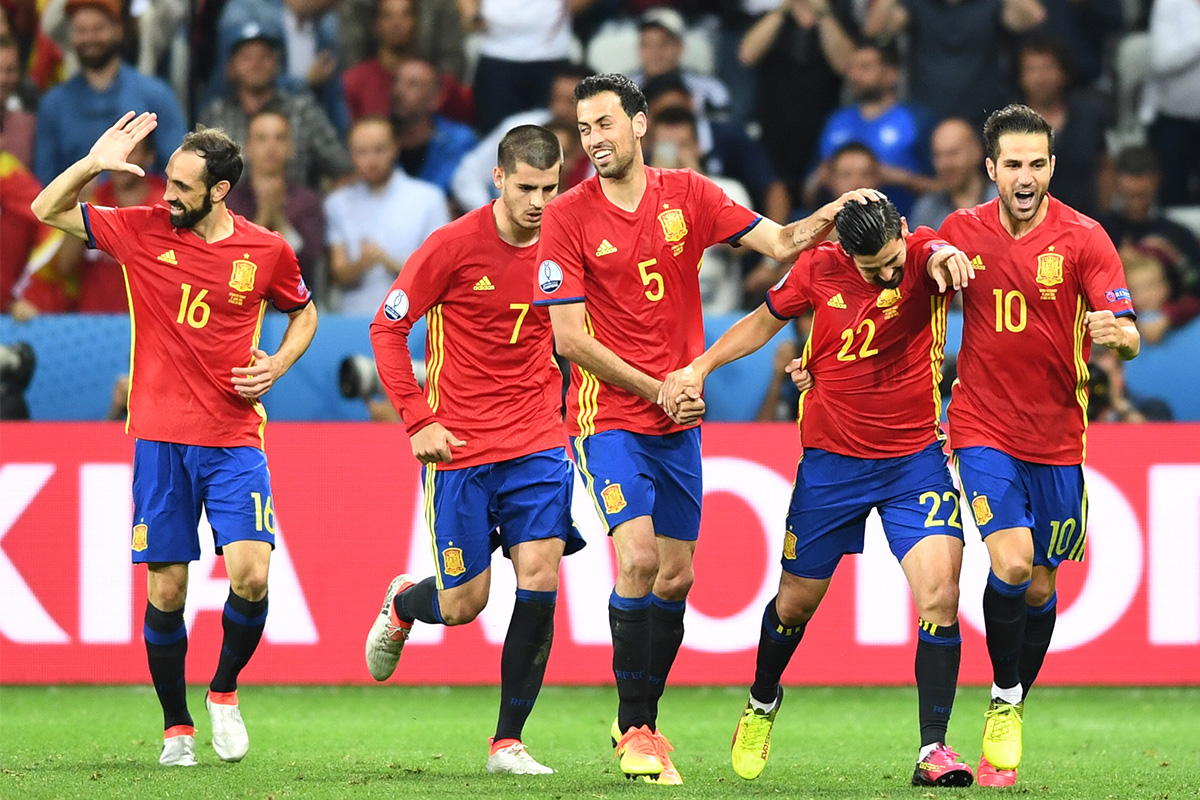 There’s nothing quite like facing your local rivals at a major tournament, and the Battle of Britain between England and Wales was always destined for fireworks. But nobody could have forecast the drama that was about to unfold in Lens.

A defensive masterclass, combined with a Joe Hart howler, saw Wales take a surprising 1-0 lead into the interval before substitute Jamie Vardy restored parity shortly after the break. Nevertheless, results on matchday one meant that Chris Coleman’s side could settle for a point, and looked destined to get it as the match rolled over into the three minutes of injury time.

Then, with a little good fortune, the ball rolled to Daniel Sturridge, another England sub, who poked the ball past Wayne Hennessey to provide the blockbuster finish. Scenes of jubilation followed as the entire squad, and assistant coach Gary Neville, celebrated like they’d won the whole tournament.

As for Wales, they’d soon get over the immediate heartbreak. 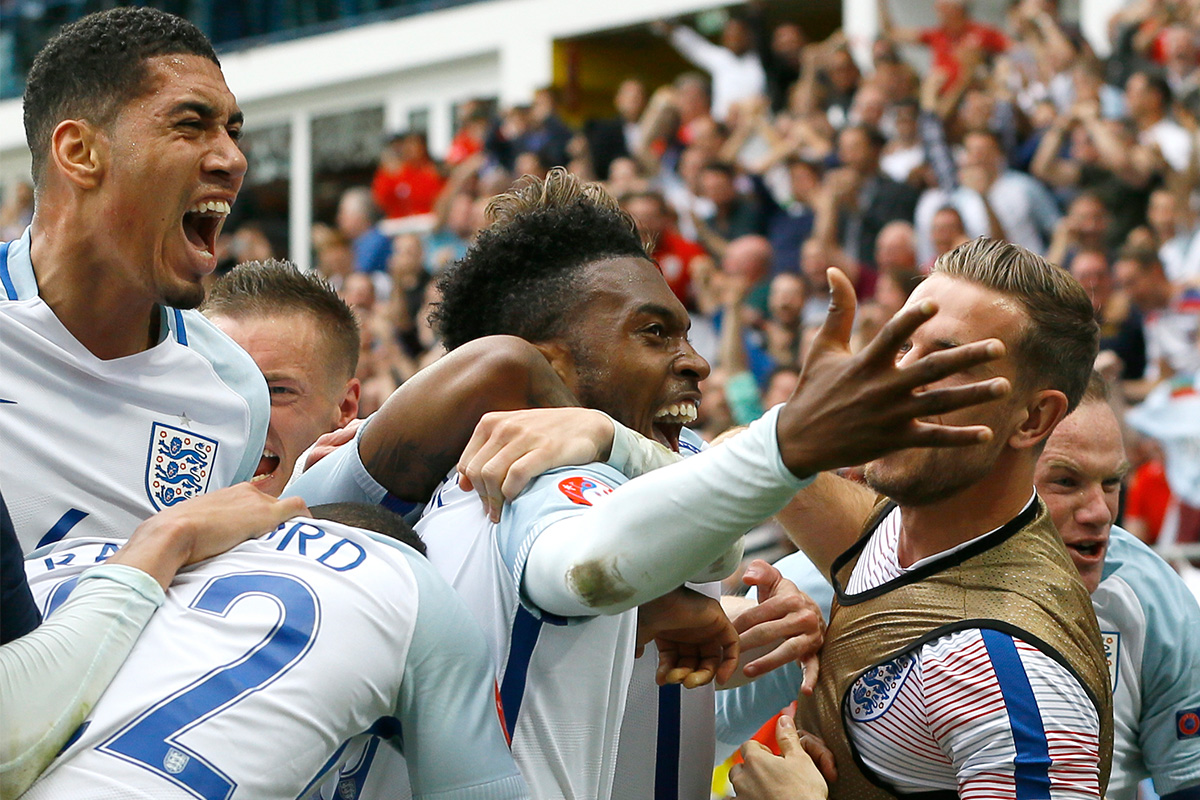 After 58 years of waiting for a tournament appearance, Welsh fans would have gladly settled for any progression to the knockout phase, especially after losing to England in such soul destroying circumstances. Rather than letting that result get them down, though, Coleman’s men bounced back to show that they’re more than capable of cutting the mustard in France.

With the pressure cranked up to 11, Wales responded with a faultless display in Toulouse. Aaron Ramsey’s opener, following an inch-perfect pass from Joe Allen, set the Red Dragons on their way before Neil Taylor doubled  the lead after just 20 minutes.

A second-half strike from Gareth Bale, who was the only man to score in all three group games, rubber stamped their progression while Slovakia held out against England to complete the most magical night in Welsh football history. 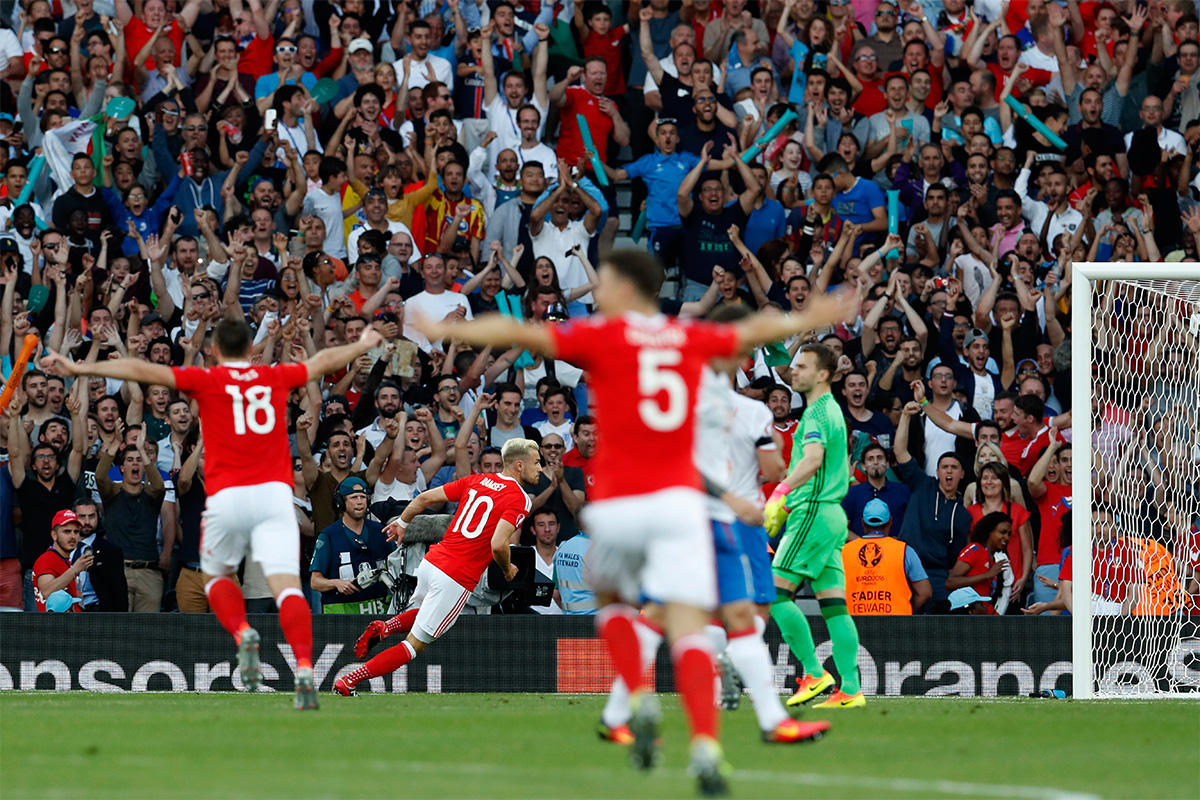 The group phase of Euro 2016 will arguably be best remembered for late drama and goals; none were more important than the Republic of Ireland’s late winner against Italy.

Results in other groups meant only a win would do for Martin O’Neill’s men, and their chances were boosted when Conte named a weakened side following two wins that had already sealed top spot for the Italians. However, with time running out, the Irish were still goalless and looking rather bereft of confidence.

However, a perfect Wes Hoolahan cross allowed Robbie Brady to sneak in with a dramatic late header to seal the win needed to send the Republic through. Given everything that had happened over the previous 13 days, it was a fitting finale to what has been a truly memorable group phase. Moments like this were the whole point of extending the tournament to 24 teams. Sadly for Turkey, the late drama dumped them out of the competition. 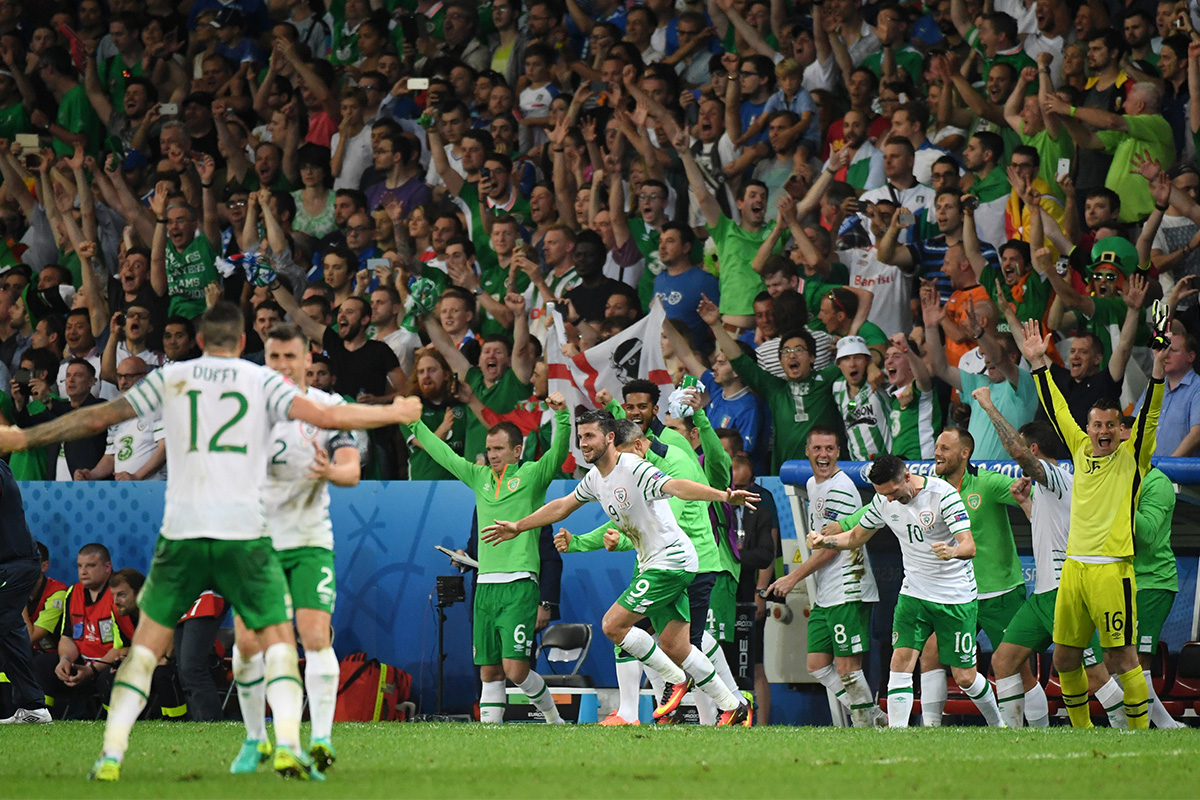 1. Cooly Does It For Iceland (Iceland V Portugal. June 14th)

Despite qualifying in convincing fashion, cynics were quick to dismiss the hopes of the tournament’s smallest nation. Those negative words soon had to be eaten, though, as Iceland picked up a brilliant draw in their Group G opener with Portugal.

Having fallen behind to Nani’s strike on the half-hour mark, Iceland replied with a fantastic team goal scored by midfield star Birkir Bjarnason. More impressively, though, Lars Lagerback’s men were able to withstand the subsequent onslaught to seal a point in St Etienne to show that they aren’t in France simply to make up the numbers.

Iceland’s drama followed them right up until the final moments of the group phase, concluding with a last-gasp winner against Austria to book their place against England in the round of 16. Regardless of what happens now, seeing a nation the size of Coventry fire their way to the knockouts will always be a highlight. 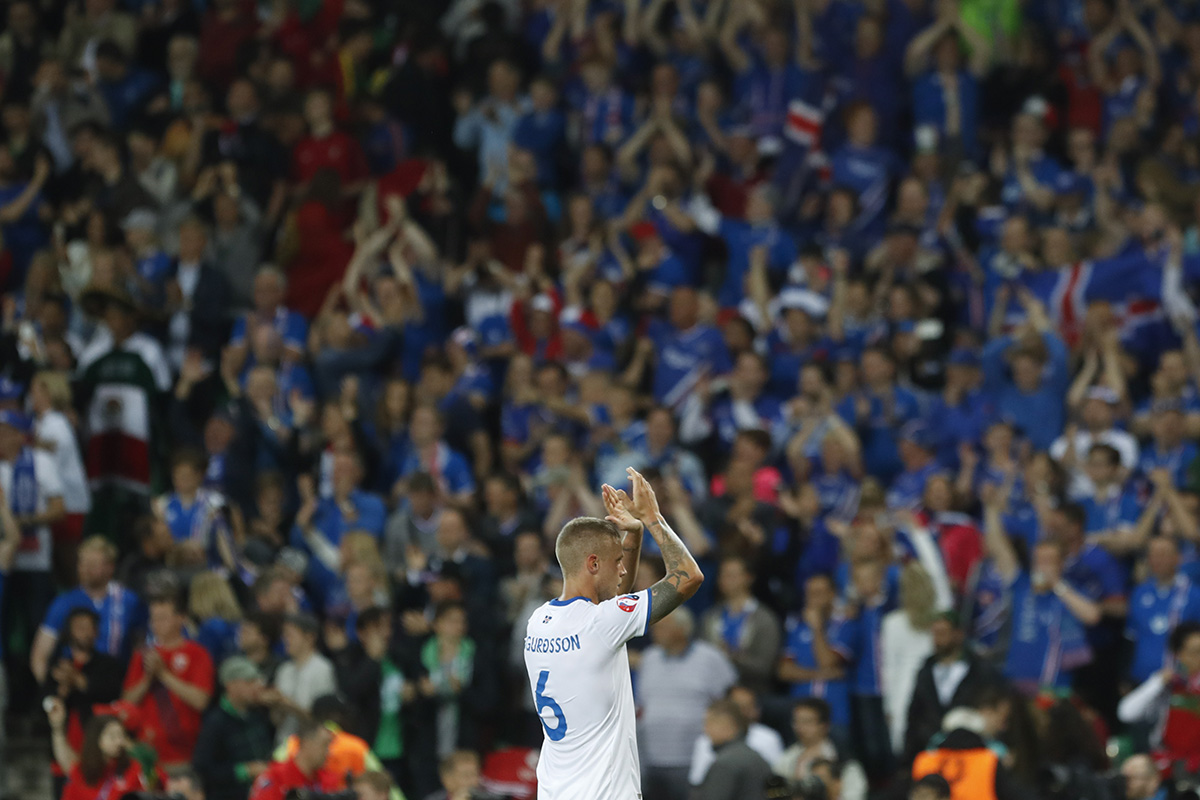 Despite plucky performances in each of the opening two fixtures, Albania entered the final group game of their first major tournament still seeking a first goal. Not only did they find the target, but they registered their first win too.

Zurich forward Armando Sadiku provided the county’s moment of magic by nodding past a poorly positioned Ciprian Tatarusanu, and the brave Albanians held on to give themselves three points and a chance of appearing in the last 16.

Results elsewhere condemned Gianni Di Biasi’s men to an early exit anyway; nevertheless, it was an unforgettable night for the debutants. Had it been enough to see them through, it would have made our 11 too. 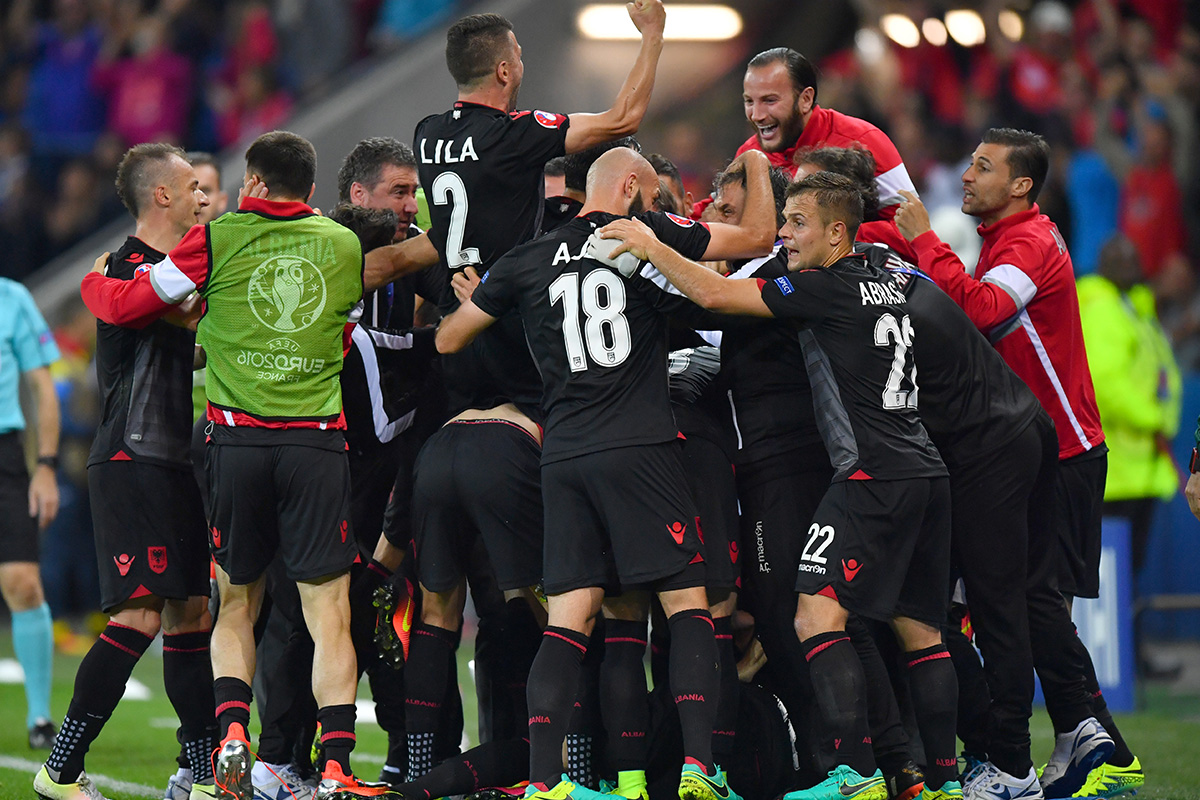