There are just 72 hours of the January transfer window remaining and it promises to be a hectic finale the the month.

We've already seen Virgil van Dijk, Philippe Coutinho and Alexis Sánchez complete long-awaited moves. But there are plenty of big deals still to go through as the window nears its end.

Luckily, Football Whispers have got you covered to ensure you never missed a rumour, move or transfer saga.

Our unique algorithm gives every rumour a score between one and five – five being the most likely to happen – to help you separate the fact from the faction.

With three days remaining, here are the ten deals across Europe most likely to be completed according to our algorithm. 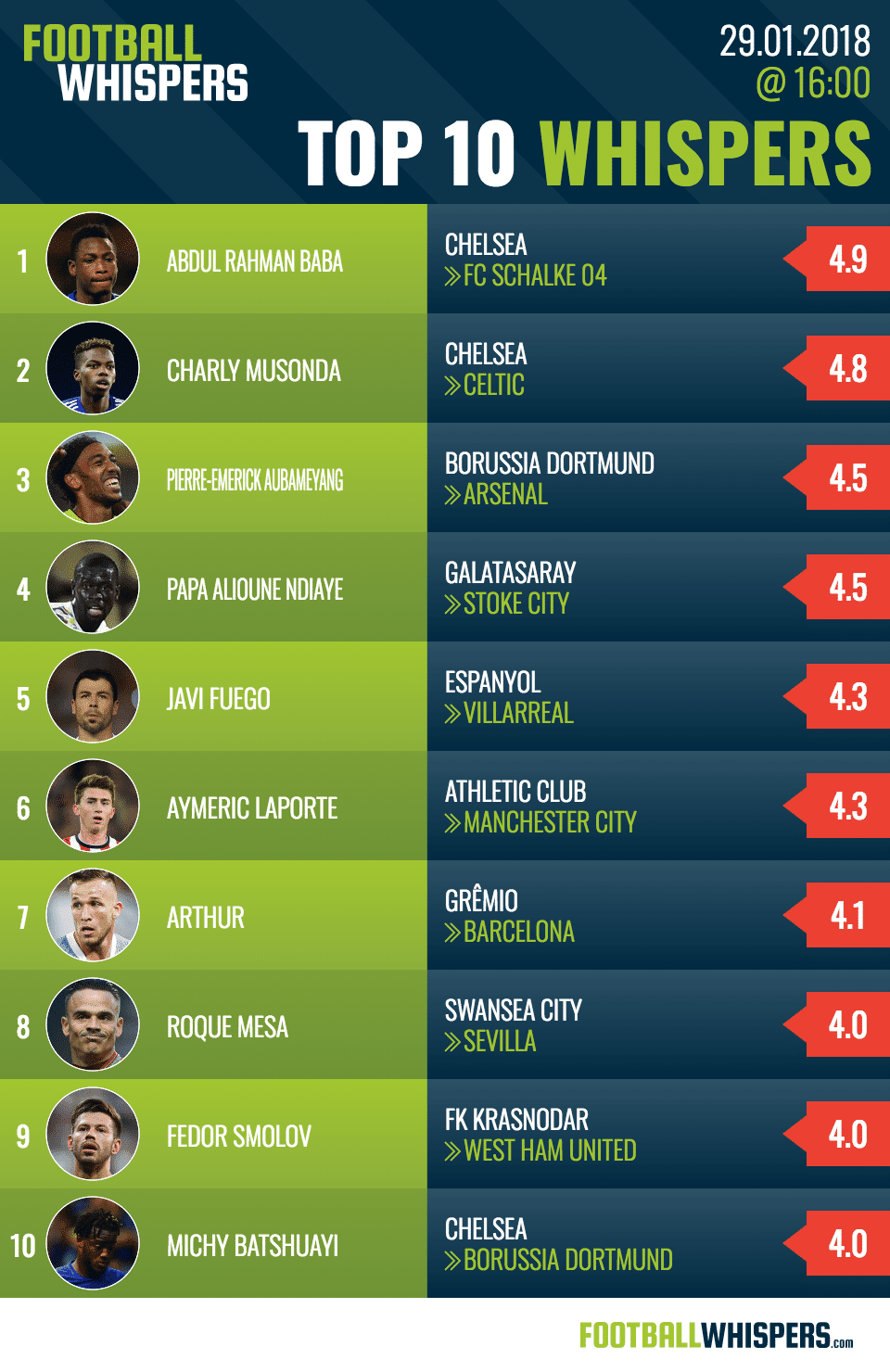 The defender's disastrous spell at Chelsea looks to be coming to a close with the news he will return to former club Schalke on loan for the remainder of his Blues contract.

Rahman, 23, joined Chelsea from Augsburg ahead of the 2015/16 campaign but could not make the left-back spot his own. He spent last term on loan at Schalke and will return to Gelsenkirchen on loan for the next 18 months, according to Sky Sports News.

With Musonda would be one of those to benefit from the lack of depth in Antonio Conte's squad.

But the Belgian, who spent last season on loan at Spanish outfit Real Betis, has been unable to break into Conte's side and looks bound for a loan move to Scottish champions Celtic. According to the BBC, he has landed in Glasgow to complete the move.

The Gabonese striker finally looks to be closing in on a move to Arsenal after the Gunners saw two initial bids rejected.

An Arsenal transfer target throughout January, Aubameyang appears to have all but burned his bridges at BVB and the BBC report the Premier League side have agreed a £60million price for the forward.

New Stoke boss Paul Lambert has only been in charge of the Potters for one game but he has wasted no time in putting his stamp on the squad with a deal for Galatasaray's Ndiaye believed to be close.

The 27-year-old is expected to cost around £16million but, speaking this afternoon, Lambert told the Stoke Sentinel: “Tony Scholes will deal with that side of it. We spoke about players and there's players we think can help, but January is a really difficult month to bring the right type of people in.”

With captain Bruno Soriano having missed the entire campaign so far, Spanish outfit Villarreal have moved to agree a deal for 34-year-old Espanyol midfielder Fuego.

The veteran midfielder will join the Yellow Submarine on an 18-month deal for a fee of €1million, according to AS. Fuego was left out of Espanyol's 3-2 defeat at Leganés on Sunday as he prepares for the switch.

Laporte has been a Manchester City transfer target for a little while now but the Citizens finally look to have got their man after agreeing to match the defender's £57million release clause.

The Athletic Bilbao centre-back has been one of La Liga's finest centre-backs for some time now and this afternoon released a farewell message through the club's Twitter account.

A Barcelona transfer target for several weeks, the Blaugrana have, according to Brazilian outlet GauchaZH, finally submitted an offer for the 21-year-old who currently plays for Gremio.

According to reports, Barça are keen to tie up a deal for the midfielder and have been quoted as much as €50million for the diminutive midfielder who would be loaned back to Gremio for the remainder of the season.

Subject of Tottenham Hotspur transfer rumours last spring, the diminutive Spaniard's move to Swansea City has been an unmitigated disaster and he has made just nine Premier League starts this season.

Not fancied by previous Swans boss Paul Clement or his replacement, Carlos Carvalhal, the 28-year-old will return to Spain to join Sevilla on loan for the rest of the season before a full-time move, according to Sky Sports News.

Russia captain Smolov could be the answer for Moyes. The 27-year-old has 59 goals in 90 outings for Krasnodar and the Hammers, according to Sky Sports News, want a loan deal with the option to buy. The Russian outfit want £12million up front.

The Chelsea striker has never been able to prove to Conte he is worthy of a run in the side and that does not look like changing any time soon having been afforded just three Premier League starts this season.

With Aubameyang looking set for a move to Arsenal, BVB need a striker to replace the Gabonese . Batshuayi is the player they appear to have settled on – according to German newspaper Bild – with a loan for the remainder of the campaign most likely.