It promises to be a busy final three hours of the January transfer deadline with a number of Premier League deals expected to be completed before 11pm.

There's also the small matter of seven top-flight fixtures to contend with, ensuring a chaotic evening for clubs and their officials.

Football Whispers are here to help you keep track of it all. Using our unique algorithm, which gives each rumour a rating on a scale of one to five – with five being the most reliable – we've got the ten deals most likely to go through this evening. 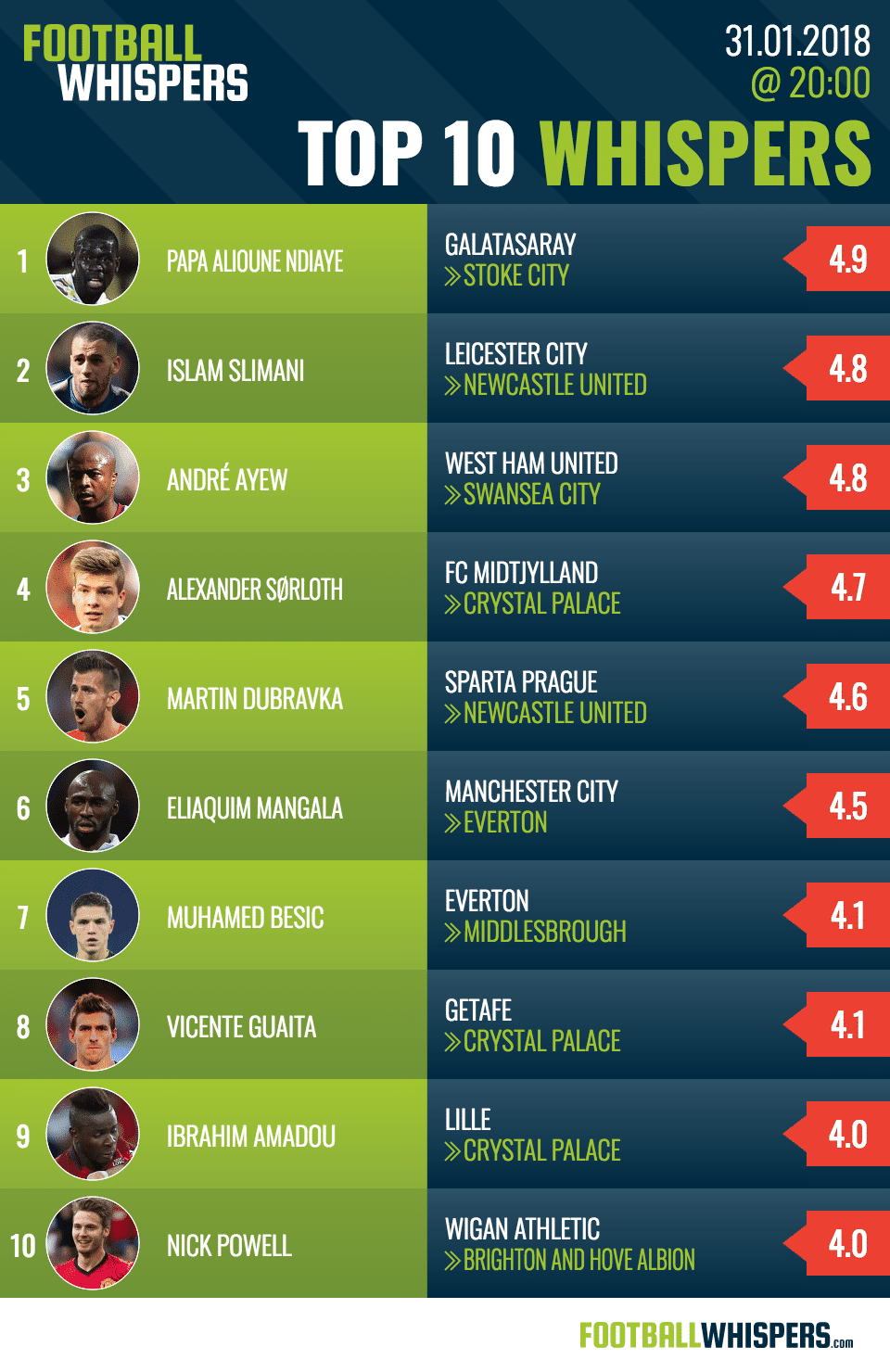 The Potters are in Premier League action tonight against Watford in what could prove to be a pivotal match in their battle against the drop.

Meanwhile, Stoke officials will attempt to get the £15million signing of Ndiaye over the line. The Galatasaray midfielder, according to Sky Sports News, has passed a medical at Stoke and the Potters have the paperwork to proceed with the deal. This should be a formality for Paul Lambert's side.

Rafael Benítez‘s striker search finally appears to be at an end with the news Leicester City‘s Slimani will join on loan until the end of the season.

The Algerian, who is Leicester's record signing at £29million, is set to join the Magpies on loan for the rest of the season, according to Sky Sports News. He underwent the first part of his medical this afternoon and the rest will be conducted at a hospital. A thigh injury will rule him out for the next fortnight, however.

Swansea seem intent on getting the old band back together. Having re-signed Wilfried Bony from Manchester City in the summer, the Swans are now closing on on Ayew.

The 28-year-old Ghanaian moved to West Ham United two summers ago but has been a peripheral player this season. Speaking earlier this evening, Swansea chairman Huw Jenkins told Sky Sports News: “The deal with Andre we’re trying to conclude that today as quickly as we can and Andy King coming on loan from Leicester trying to finish off in next hour to two.”

Palace boss Roy Hodgson has been desperate to land a striker since he arrived at Selhurst Park and the wait appears, finally, to be over.

The Eagles are expected to sign £9million-rate FC Midtjylland forward Sørloth. However, they will have to wait for the Danish side to find a replacement, according to Sky Sports News, before the deal can be completed.

The goalkeeping position at Newcastle has been a mess all season. Benítez does not trust any of his current options, leading to reports World Cup winner Newcastle transfer target.

However, the Magpies now look set to sign Slovakian international Dúbravka on loan from Sparta Prague until the end of the season. The Chronicle reports the 29-year-old is on Tyneside ahead of his move. That will spell the end of Rob Elliot and Karl Darlow sharing No.1 duties.

With Manchester City completing the £57million club-record signing of Aymeric Laporte this week, countryman Mangala is surplus to requirements at the Etihad Stadium.

Mangala spent last season on loan at Valencia, generally impressing, but the 26-year-old has made just four Premier League starts this term and will head to Goodison Park on loan to bolster Everton's leaky backline. The Liverpool Echo report the deal will be completed before 11pm.

Having made just two substitute outings in the Premier League totalling 44 minutes this season, Bešić is surplus to requirements at Everton.

The Bosnian international is set for a loan move away for the rest of the campaign and should become Tony Pulis‘ first signing at Middlesbrough. However, the Liverpool Echo claim the move has stalled.

Just behind a striker in Crystal Palace‘s priorities is a goalkeeper. Hodgson dropped Wayne Hennessey shortly after succeeding Frank de Boer but has recently reinstated him in favour of veteran Julian Speroni.

However, it is clear he does not trust the Welsh cap and Palace are set to sign Getafe's Guaita, who had been a Watford transfer target, for around £3.5million. The Spanish side need to complete a deal for replacement first, however. The Daily Mail claim the 31-year-old has already passed a medical.

It looks like being a busy final few hours at Crystal Palace. As well as Sørloth and Guaita, the Eagles lead the chase for Lille midfielder Amadou, who is also a West Ham United transfer target.

The Lille skipper will cost around £16million, if Palace can convince him to move to Selhurst Park over the London Stadium. Sky Sports News make Palace the favourites to sign the 24-year-old.

Snapped up by Manchester United as a teenager, Powell made just nine appearances in four years at Old Trafford before leaving in 2016 to join Wigan Athletic, then of the Championship.

However, the 23-year-old has rediscovered the form which convinced Sir Alex Ferguson sign him from League Two side Crewe Alexandra in 2012, bagging 11 goals from midfield this season. The Argus claims the Seagulls will complete a deal despite seeing two bids rejected by Wigan.