One of the buzzwords in football these days is ‘sustainable'. Managers are constantly trying to come up with ways to ensure their success can be repeated. The more stats a team has access to, the easier it is to spot trends and ensure patterns can be duplicated.

It's why expected goals and expected goals assisted have now reached the mainstream media. They help fans understand whether a player who had the best season of his career has stepped up his game or whether he was going through a purple patch instead.

Expected goals (xG) gives a value to the chances a player has. The higher the xG90 value, the better the positions the player regularly gets himself in. Similarly, if a player has a high number of chances they're likely to have a higher xG total. After all, it's about repetition.

Expected goals assisted (xA) looks at the chances a player creates for a team-mate. A higher score usually means a player creates a number of good opportunities or they've managed to create one outstanding chance in most matches they've played.

With this in mind, we've decided to take a look at the players with the highest xG+xA90 totals in Europe's top five leagues this season to find out who the biggest goal threats are. 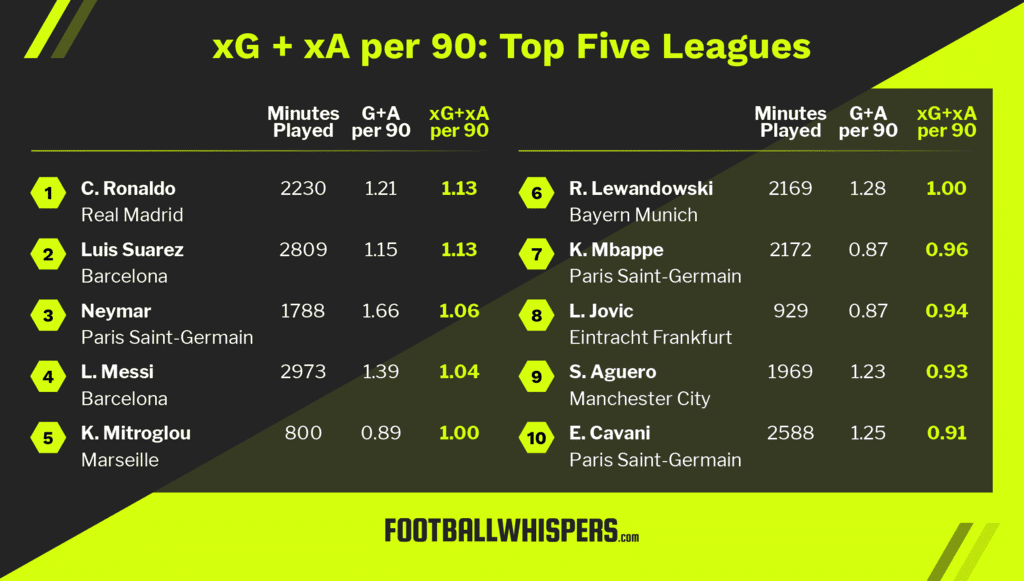 The graphic above ranks the top ten. For context the minutes played and the actuals goals and assists per 90 have been included.

Cristiano Ronaldo hasn't let Father Time catch up with him just yet. The Real Madrid forward is joint top with Barcelona‘s Luis Suárez. The pair have an xG+xA90 total of 1.13, 0.07 clear of Neymar in third.

However, the world's most expensive player has outperformed his xG totals this season by 0.60 per 90. Can the Brazilian maestro sustain his form next season in Ligue 1?

He's not the only one to hugely over-perform against his expected numbers in this top ten, either. Messi, who ranks fourth in the graphic above, is 0.35 better off in real life. Robert Lewandowski (0.28), Sergio Agüero (0.30) and Edinson Cavani (0.34) are all punching above their expected weight, too.

It'll be worth watching Luka Jović and Kylian Mbappé next season. With more experience the pair will be even more dangerous.

Mohamed Salah just misses out on this list. That doesn't mean he's a one-season wonder. But it does mean he wasn't expected to score or assist as often as those in the graphic. But, like the other elite players in the list, he outperformed this metric.

His xG+xA90 tally was 0.88 but the Liverpool No.11 was involved in 1.29 goals and assists per 90 this season. There's no reason he can't replicate his 2017/18 campaign next season. That's what the numbers suggest anyway.