The season opener saw Sydney claim a point from their efforts in the derby against crosstown rivals, Western Sydney Wanderers. The Sky Blues will be playing in the comforts of the Jubilee Oval as they host Macarthur on November 27.

Here are our predictions for Sydney vs Macarthur.

Steve Corica's men showed pre-season jitters as they failed to get over the line in the derby against Western Sydney Wanderers. Last season's runner-ups will be in better conditioning this time around as they host Macarthur. The Sky Blues lost bragging rights in the other derby last time around and will be looking to undo the mistakes of their past. They are on a nine-match unbeaten streak at home, winning seven of these engagements and should add be able to their tally.

Only two of Macarthur's last five fixtures have seen the score reach the three-goal mark. For Sydney, the stats board read three in four, but only one of these took place at the Jubilee Oval. With only one of the last four fixtures seeing Over 2.5 total goals, we are pessimistic about a high scoring affair.

The two duels between Sydney and Macarthur last season saw just one side score in both meetings. Sydney were shut out at home after managing the same at the home of the Bulls. With the Sky Blues failing to score in their season opener, we believe it will this low scoring affair will not see both sides represented on the scoreboard.

Sydney vs Macarthur: Check out the best odds and the latest stats

Match Preview of Sydney vs Macarthur: Sky Blues look to avenge the defeat of past

A second-place finish would not have piqued Sydney FC's thirst for glory and they will surely look to go one step further this time around. Steve Corica has a settled squad on his hands and needs to deliver the big win in his third season in charge. The Sky Blues started the campaign tamely with a nil-nil draw against Western Sydney Warriors and need to get one over Macarthur in their second match of the season.

The Bulls will be anticipating a tough fixture but nerves would have settled in the newly formed A-League outfit. Macarthur dealt their crosstown rivals' title challenges a blow with a victory in this fixture last time around. A repeat of their previous heroics would surely stir the debate of which team is a force to reckon with in the Emerald City.

Questions About Sydney vs Macarthur 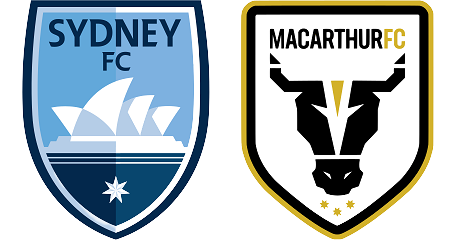 Where is the game being televised?  BT Sport.