Saudi Arabia finished their World Cup qualifying campaign with a crunch encounter against Australia. While the Arabian Falcons have booked their place for the Qatar extravaganza, the Socceroos still have to go through the playoff tribulations.

It has been a poor qualifying campaign for Australia and Graham Arnold will be one of the first to admit it. Saudi Arabia will be pleased with their efforts but will be aware that the job is not done. They have struggled in their recent outings with just one win from their last six outings. With bragging rights on the line as well as a much-needed win for morale, Hervé Renard will not let up in this dead rubber. Expect the hosts to claim the three points on offer as they use the inhospitable climate to their advantage against the Socceroos.

Neither Australia nor Saudi Arabia will be pleased with their scoring performances in the qualifying campaign. The hosts have barely managed to score a goal per game with 11 strikes from 9 fixtures. Australia's stats are better with 15 goals in the same amount of outings. With the Green Falcons seeing seven of their nine fixtures conclude with Under 2.5 total goals, we expect for of the same. The Socceroos have also seen recent outings conclude in this manner with three of their last five outings not breaching the three-goal mark.

Saudi Arabia vs Australia: Check out the best odds and the latest stats

Saudi Arabia vs Australia: Check out the team lineups

Hervé Renard has lived up to the task assigned to him as Saudi Arabia make their belated return to the FIFA World Cup. Their last outing did not go as planned and their current results marks towards a similar outcome. To overcome dismal outings, they need to start giving better results and will get the opportunity to showcase their mettle against fellow regional powerhouse Australia. They earned an impressive stalemate in the reverse fixture and will want to go one better in the return leg.

While Herve Renard is garnering praise in the Saudi Arabia dugout, Graham Arnold is under severe scrutiny. The Socceroos manager was supposed to have wrapped up the 2022 World Cup qualification by now but look at a long road ahead. Irrespective of the result on Tuesday, Australia will finish third in Group B and will have to go through the playoff lottery. They can kickstart their preparations with a result against the Green Falcons. It will not be easy as the hosts earned a goalless draw on the road and will seek a positive result at their expense in their backyard.

Questions About Saudi Arabia vs Australia 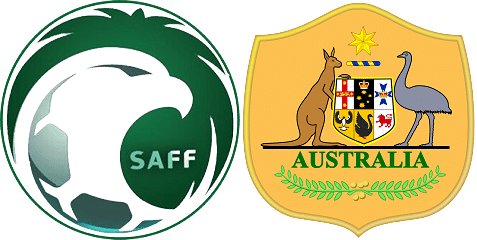 Who won the last h2h? 0-0 draw at the Western Sydney Stadium.

Where is the game being televised? CMore (Fin), and Diema Sport 2.