With Chelsea recently being crowned champions for the 2021 FA Women’s Super League, all eyes and ears have turned to their star player – Sam Kerr. This talented soccer player hasn’t only won the title with Chelsea, but she has also been given the Golden Boot for the season, which means she has scored more goals than anyone else in the league. Of course, this is an amazing achievement, but there are more reasons why the Sam Kerr Golden Boot story is perhaps one of the most exciting in recent years. Sure, we already know she has the award in her cabinet, but when you dive into the statistics for her remarkable 2021 season, things just seem to get better.

In order for the Sam Kerr Golden Boot story to emerge, she needed to score the most goals out of any other player, which is fairly difficult to do. But regardless, Kerr has been prolific all season, and the award is now firmly fixed for her. However, some of the subcategories that have underpinned this success are equally as impressive, which we’ve highlighted below.

You can look at all of the statistics you like, but at the end of the day, the Golden Boot award is only credited to the player that scores the most goals at the end of the season. In the case of Sam Kerr, she has banged in 21 goals throughout the season, which as it happens, is more than 30% of the goals that Chelsea managed to score in total. The team actually accumulated 69 goals for the season, and with Kerr hitting home 21 of them, it’s no wonder that Sam Kerr Chelsea shirts have been flying off the shelves. And it’s not like she was constantly fed these chances either – she’s had to fight her way into scoring opportunities from seemingly impossible situations, and she’s skilled from both the left and right foot. Some might call her the ideal striker really, and earning the Golden Boot award cements this viewpoint.

If you are unfamiliar with this term, the scoring rate indicates how many goals, on average, a player scores for each game they participate in. Given that Sam Kerr managed to earn a scoring rate of 1.24 this season, this means that she was scoring at least 1 goal in every single game she played in – or at least on average. We probably don’t need to stress how difficult that is to achieve, and we certainly don’t need to stress how much confidence this would give the Chelsea women when they step onto the pitch. And if you are wondering how Kerr has managed to rack up such a figure, she played in 22 games and scored 21 goals, which is something that not many of the best male players even manage to achieve in their careers. This is a seriously impressive statistic, and it’s one she should be proud of.

Assists – 7th in the league 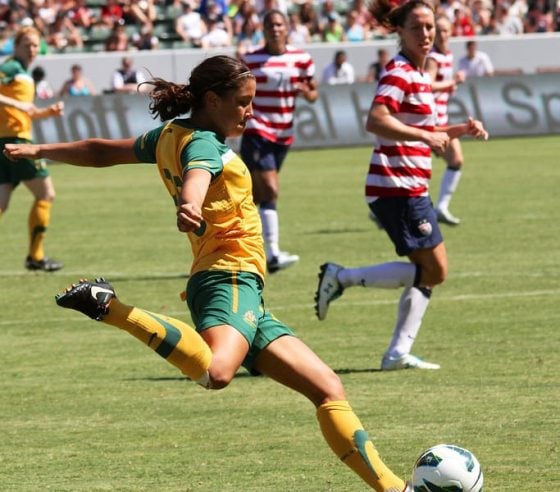 You’ve probably heard the term ‘greedy strikers’ before, and yes, it can be a very real problem in certain soccer clubs. Sometimes, when you get such a capable striker like Kerr in a team, they can often want to do things themselves, but this statistic proves that Kerr is willing to share the glory and supply a better shot at goal if it’s available. As things finished, she was 7th in the overall standings for assists, whereas her Chelsea counterpart, Fran Kirby, took the win in the assist department. In terms of the number of assists, Kerr supplied 7 goals to her Chelsea teammates, meaning that when you combine her own individual goals along with her assists, she has, directly and indirectly, helped Chelsea to score 28 goals for the season. Once again, it’s clear to see the influence that she had in the team this season.

Minutes per goal – 73 on average

With a standard game of soccer lasting 90 minutes, we don’t need to tell you how awesome this figure actually is. To clarify just how awesome, every time you saw the words ‘Sam Kerr Chelsea’ on the team sheets, you could assume that she was probably going to score a goal for that specific game. This somewhat ties in with the scoring rate that we’ve already mentioned, but then again, scoring a goal every 73 minutes (on average) is another critical factor that should not be overlooked. Sure, this doesn’t guarantee that Kerr will be scoring exactly at that moment, but as they say – numbers don’t lie! The only other player that even came close to this number for the season was Fran Kirby, who was averaging a goal every 86 minutes, which is also quite remarkable.

Total shots – 2nd in the league

One of the things we like the most about Sam Kerr’s game is how attacking she is, which is confirmed with this final statistic. Of course, to score goals you have to take aim and fire – and there are few that do this with more regularity than Kerr. In fact, there was just one, in the form of Arsenal’s Miedema, who actually finished second in the overall goal-scoring leaderboard. Having taken aim and shot at goal 71 times for the season, you could be fairly certain that Kerr would be attacking the goal relentlessly for each game she played in, and since she netted 21 of these shots – her scoring rate was approximately 30% for all shots taken. Therefore, by simply following the law of averages, Kerr would score a goal for every 3 in 10 shots, although this wasn’t actually the best scoring percentage in the league, surprisingly.

Bonus – her partnership with Fran Kirby

Let’s leave the statistics behind for this final piece of information, as we feel that this partnership should be brought to light for just how prolific it was. As you may have picked up through the information above, where there was Kerr – there was Kirby. These ladies formed a bit of a dream team for the 21 season, bouncing off each other with a great mental connection and games that complimented each other, almost to a tee. As it happens, Kirby was the only other player in the league to achieve a scoring rate higher than 1.00, and her conversion rate was 47% for all shots taken – which is better than Kerr’s. Then again, it’s not a matter of who beat who in which department, it’s a matter of how well these two played together, and it really was a joy to watch.

Although Kerr led the regular Super League season in terms of goals scored, the Golden Boot trophy actually takes into account the goals scored in all competitions. This structure makes her achievement all the more special, as she scored in the final game of the season during Chelsea’s 5-0 win over Reading, and this goal gave Kerr the award! It really is a fairytale ending, and she deserves the trophy for her quality and consistency all season!