Melbourne City hosts Newcastle Jets after their midweek debacle against Adelaide United. The Heart suffered their third defeat of the season, allowing Western United to stay at the top for more days than they are willing.

After registering just one win from their first six games of the campaign, Newcastle Jets have added two more to their tally in the following three. They will be bursting with confidence after defeating Melbourne Victory and will want a similar result against the crosstown rivals. Melbourne City will be in no mood to jest around after giving up another opportunity to take pole position. Five of their last six meetings with the Jets at AAMI Park have finished in their favour and they will want to add to that tally. This will be the likely outcome as the Jets are still not match-fit after seeing most of their recent fixtures postponed due to the coronavirus pandemic.

Jamie Maclaren's eighth A-League goal of the 2021/22 campaign was not enough to save City against Adelaide. The Reds equalized in the first half and then the lead with an 85th-minute strike from 17-year-old Mohamed Toure. This was the ninth Over 2.5 goals conclusion from their twelve league outings this season. They are sure to give a similar performance against Newcastle Jets, who have a penchant for high scoring affairs. All nine of the Jets league outings have seen at least three goals this season and we expect the trend to continue.

Melbourne City vs Newcastle Jets: Check out the best odds and the latest stats

Melbourne City vs Newcastle Jets: Check out the team lineups

Patrick Kinsorbo would have turned Melbourne City's dressing room upside down following their defeat to Adelaide United. Not only did it allow Western United to keep their lead but also a match in hand. It also saw the Reds creep up next to them on the points table. They will look to make amends for their midweek gaffe which saw their home form only allowing two wins from six fixtures at the AAMI Park.

While City are good travellers with three wins in six outings, the same cannot be said about Newcastle Jets. Arthur Papas' men have only won once on the road. However, they will feel confident that it was their most recent result and came against City's rival Melbourne Victory. They can return from Melbourne with the three points on offer and will make sure to punish the City defence more than what they receive. 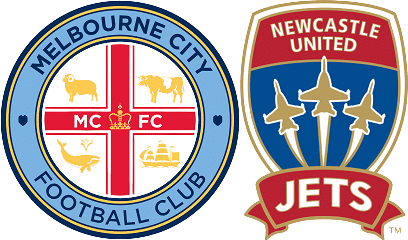 Who won the last h2h? 2-4 in favour of Melbourne City.

Where is the game being televised? Arena Sport, BT Sport, and DAZN Italia.