Macarthur FC will be keen to reverse the form of consecutive defeats when they take on Newcastle Jets in the coming fixture of the A-League. The Bulls will also be confident against the rivals that are on a three-matches losing streak.

Macarthur has lost three of the last four outings but managed to succeed three times in the previous five home attempts. On the other hand, Newcastle Jets are getting rapid declining with consecutive defeats, losing four of the recent five league outings. The Jets are also winless in the last seven away games. Back to the teams’ H2Hs, the Bulls have been unbeaten and won two out of four. So we pick Macarthur to fancy their style once again in front of their home fans.

Bulls and Jets attackers to profit

Newcastle Jets might not have put enough effort to get winning results but the front line has played their role in all of the recent games, scoring at least two goals in three of the previous four. In opposition, Macarthur are also scoring consistently in the last three home games. Lastly, all of the recent H2Hs meetings between these teams finished with a display of the BTTS pattern. So we would be looking for the same outcome in this game as well.

Macarthur vs Newcastle Jets: Check out the best odds and the latest stats

Macarthur vs Newcastle Jets: Check out the team lineups

The Bulls couldn’t continue the home winning form and dropped three points in the 1-4 victory against Melbourne Victory. the lack of consistency in the recent attempts made them fall to the seventh position of the table, securing 32 points. The club manager Ante Milicic will be ready to enter the field with the availability of all players on the squad.

After playing a defeated first half where they leaked three goals, the Jets lost their consecutive second home game by 2-4 against Central Coast Mariners previously. The team could manage only seven wins in the 23 league attempts and find themselves ninth in the standings. Ben Kantarovsky will not be available for this game due to medical reasons.

Questions About Macarthur vs Newcastle Jets 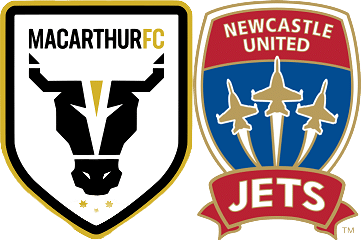 Where is the game being televised? Arena Sport (Cro), BT Sport.

Where is the game being played? Campbelltown Stadium (Sydney).