Following their away defeat, Macarthur returns home for the next engagement of the A-League against Melbourne Victory. The Big V follow their winless streak of 11 league outings.

Victory for away glory

Macarthur has won each of the last two home attempts but lost two of the previous three overall meetings. While they are going to face the team that registered consecutive three wins in the last away duels. Melbourne will also be confident over the long winless streak and four winnings in the last five attempts. The last meeting of the team also ended in the favour of the Boys in Blue. Based on their current form, Melbourne Victory are highly probably to take the points once again in their upcoming encounter.

Goals for the Bulls and Victory

Helping the high-scoring totals, the teams had also been scoring at the same time in all of the H2Hs. The Bulls lagged in some of the previous away outings but they have rattled the net in five of the last six attempts. while in opposition, Victory has scored in all of the recent away duels. In addition, Macarthur didn’t keep a single clean sheet in any of the last 11 games. So our next pick for this game would be a BTTS outcome at the end.

Macarthur vs Melbourne Victory: Check out the best odds and the latest stats

Macarthur vs Melbourne Victory: Check out the team lineups

The Bulls got their second away defeat in a row in the last game against Western United by 0-2, conceding both goals in the second half. With the help of nine wins and five draws in 23 league games, Macarthur are sixth in the standings. The club manager Ante Milicic owns a fully healthy squad available for this game.

The Boys in Blue continued their progress of the 2021-22 campaign in the last game and won against Newcastle Jets in the last away outing. After securing ten wins in the 22 games, Melbourne Victory are at the third position of the points table, having games in hand from the top two. Robbie Kruse will be out of the game due to a knee injury.

Questions About Macarthur vs Melbourne Victory 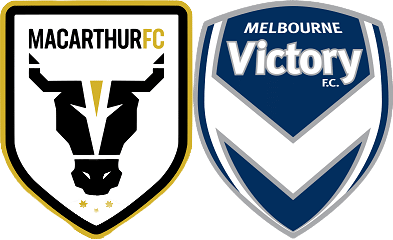 Who won the last h2h? 3-1 in favour of Melbourne Victory.