If you’ve watched a bit of A-League soccer at some point over the last decade, it’s likely you’ll have seen Besart Berisha in action. This man first stepped onto Australian soil to play professional soccer all the way back in 2011, and it’s fair to say he is regarded as one of the greatest the league has ever seen. The records and statistics that Besart Berisha holds are nothing shy of breathtaking, and we will be covering all of them throughout. But for now, if you’d like a quick introduction to this formidable striker, let us give you one. He has been the most prolific goal scorer of all time in the A-League, he is still tormenting opponents at the ripe old age of 35, and it seems he is far from satisfied with his already impressive records.

Does that give you more of an idea about what this man is all about? We hope so, but for now, let’s get into some specifics about what has made Besart Berisha’s career so iconic.

Why is Besart Berisha so special?

When people discuss the greatest players of all time in whatever sport, league, or competition, the old adage is that numbers don’t lie. This is certainly the case with Besart Berisha, as his resume is loaded with accolades that even the greatest strikers would be proud of. So, ready to have some fun? Let’s dive into the statistics and numbers surrounding him.

We may as well kick things off with the most impressive record of them all. At the time of writing, Besart Berisha has racked up 142 goals in his illustrious A-League career, and since he is still playing, this number will inevitably keep growing. This makes him the leading scorer of all-time for this specific league, and it’s fair to say that a few teams have shared the wealth of his striking abilities. Besart Berisha scored 48 goals during his time at Brisbane Roar, 68 while playing for Melbourne Victory, and up until this point – he’s scored 26 for Western United. It’s not like he has narrowly earned this accolade either, for he has blown the others out of the water.

The scary part is that Berisha is still competing at the highest level too, so we really wouldn’t be surprised if he went on to score close to 200 if not more goals when he decides to hang up his boots for good. 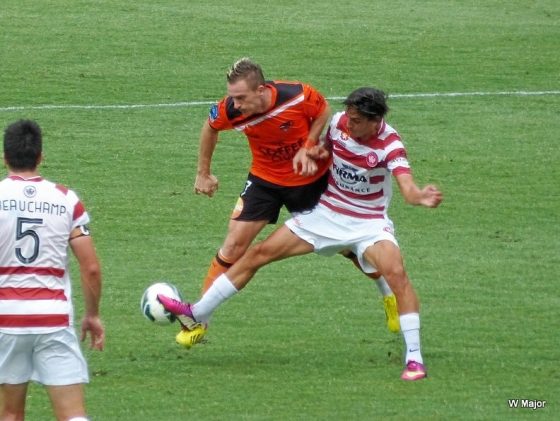 Scoring a hat-trick is the sweetest feeling for any striker, or attacking midfielder for that matter, and Besart Berisha has enjoyed this feeling on five separate occasions in the A-League. This has him tied in the first position for the most A-League hat-tricks of all-time, and as it happens, it’s his nearest goal-scoring rival that he is tied with – Jamie Maclaren. For this specific category, it’s all the more exciting that both players are still active and striving for goals in the A-League, although Maclaren is doing so in a Melbourne City shirt. Things are even spicier when you consider that Maclaren scored 25 goals last season compared with Berisha’s 7, so this category really will become a battle for next season!

We’ve got to admit, we doubt that this record will ever be equalled, as Besart Berisha is truly in a class of his own here. Believe it or not, Berisha managed to secure a hat-trick just 6 minutes into a game against Adelaide United in 2011, making it the fastest hat-trick ever scored in the A-League. Armed with this knowledge, it’s quite clear to see what kind of player Berisha was back then, and he still holds many of these star qualities even today. We would recommend that you watch the video of this hat-trick too, as it’s not like the goals just fell into his lap too. The guy was quite literally relentless with his quest to score goals in this match, and the Adelaide defence just could not contain him!

Then again, this is a feeling that quite a few defensive teams will be all too aware of in the A-League, as Berisha has that uncanny ability to just dismantle a defence if he is given half a chance.

At the time of writing, Besart Berisha has managed to win the Golden Boot award for the A-League twice, a record that had him equal with Shane Smeltz until Maclaren put in an incredible 20-21 season to claim his third. But let’s be honest, winning two Golden Boot titles is still pretty special, and what’s more impressive is how prolific Berisha was during the seasons in which he won this award. For both the 2011-2012 season and the 2015-2016 season, the two in which Berisha was given the Golden Boot throne, he was almost untouchable in front of goal. It’s not really the number of goals that made things so breathtaking either, it was more his style of play, the obvious dominance he had over defensive lineups, and of course – the goals he managed to score in these seasons contained some rather spectacular finishes.

Currently, Besart Berisha is sitting at number two of all-time concerning his goal-scoring rate, falling short once more to Jamie Maclaren – but not by much! Looking at his statistics, Besart Berisha has a current scoring rate of 0.63, per game, which is just shy of the 0.69 goals per game that Maclaren currently has. To translate exactly what this means, it means that Besart Berisha will usually score at least 1 goal for every 2 games he plays in, but since this is an average – it could be more, and it could be less. Whichever way you look at it, this is a seriously impressive statistic, although he is actually tied for 2nd due to the recent performances of another talented striker in the form of Bruno Fornaroli.

Then again, this is a pretty responsive statistic, so as one or two more seasons get played, the numbers will inevitably shift around and the rankings will adjust.

Final thoughts on this amazing striker

We hope you’ve had fun reading through the various facts and figures that make Besart Berisha arguably the best striker that has ever played in the A-League. What this man has managed to achieve in his career is nothing short of miraculous, and it’s awesome that the guy is still competing at the highest level to help his team and boost his own individual records. Mind you, at 35 years of age, you’d have thought that his best days are behind him, but you never know. A guy of his talents and abilities can always flick a switch during certain games, which makes him fun to watch, and a real pleasure to observe competing against the other high-level players in the A-League.

We just hope we manage to get a couple more seasons out of him before he chooses to call it a day!