Arguably, Aussie Rules is one of the most popular sports in Australia – hence where the name of the sport comes from, in the first place! To an outsider, this game may seem a little quirky, as it’s a bit of a mix between rugby, American football, and it’s played on a pitch that resembles a cricket pitch to be perfectly honest. But while it may seem confusing at first glance, once you understand how things work, it’s actually a sport that is quite exciting to witness. That’s why we’ve created a quick read to highlight how the game is played, what you should be looking out for, and much more. So without further ado, let’s get into where the sport is played for starters.

Where is Aussie Rules played?

To know where this game is played, you needn’t look much further than the actual name of the sport – Aussie Rules. Of course, Aussie is a slang term used for Australia, which is not only where this sport originated, but also where the popularity and interest in the sport has been sustained for decades. As it happens, this sport is as much a part of Australian culture as others like cricket and rugby, so as you can imagine – the sport attracts plenty of attention from fans and sports punters. In terms of the specific states in which Aussie Rules is played, it is enjoyed in all of the divided jurisdictions of Australia, including West, East, North, and South. And just like other major leagues around the world, the best teams are divided up among these states.

Looking at the current table, some of the key teams come from Victoria, Western Australia, and New South Wales – which is actually where most of the action takes place.

Since Aussie Rules is almost exclusively played in Australia, as you’d expect, this is where the top Aussie Rules league also takes place. The league is actually called the AFL, which simply stands for ‘Australian Football League’, and the league consists of 18 teams that all compete against one another during the regular season. This is why you’ll see that Aussie Rules games occur all over the nation, as teams must play both at home and on the road, and once the regular season is done – the top teams will compete in a post-season tournament to decide who the ultimate winner will be.

And in terms of the actual dates that this league takes, you will usually find that the first games get underway towards the end of March, therefore avoiding the peak of the Australian summer! Games then take place for the following months until the final regular-season game is finished around the back end of August – which is then where we all discover who will compete in the post-season event. Starting in September, the playoffs begin, and this is obviously a knock-out event to then decide who plays in the Grand Final, which tends to be played on the last Saturday in September.

This is always a hit event, and it’s televised on major sports channels down under. 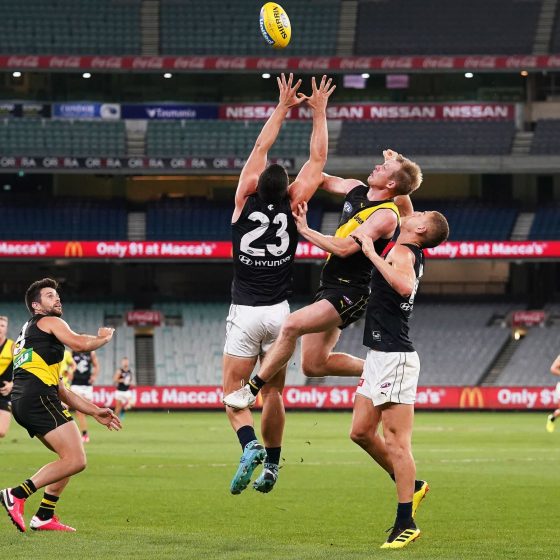 How does Aussie Rules actually work?

We hope you’ve had your coffee for this section, as this is where things get a little interesting. If you’ve ever watched an Aussie Rules game before, you wouldn’t be alone if you found that you were just completely lost with what’s going on! Therefore, let us clear up the basics for you by running over the common rules and how the game works.

Whenever an AFL game is played, this is played over four quarters, much like other sports such as basketball. However, each quarter here consists of 20 minutes, and the clock tends to tick continuously unless there are significant delays in the game. If this does occur, time gets added onto that specific quarter, and this is then calculated into the additional time for that quarter – which is comparable to other sports such as soccer. At the end of the fourth quarter, time is up, and the team with the most points wins the game.

If you ever go and check the result of a game, at first glance, things might look more like an IP address rather than the result of a game. But don’t worry – this is purely because of how the final score is calculated, and it’s something that Australian’s are quite used to, even if the rest of the world isn’t. To properly understand how this final score is understood, we need to start with the two points systems associated with Aussie Rules:

When you look at an actual Aussie Rules pitch, you’ll see a set of posts at each end of the field – two large in the centre and then smaller posts at the side. To score a goal, one team must actually kick the ball clean through the centre posts without any touch from the opposing team. This results in six points being scored, and this is where the first number of the ultimate final score comes from – which will soon become clear.

This term covers all other ways to score a point, and to put it as simply as possible, unless the team manages to score a goal (described above), it will be calculated as a ‘behind’ – resulting in one point being scored. To give a quick overview of the various ‘behind’ scenarios, you could score one by kicking the ball between the smaller posts, carrying the ball over the line that the posts stand on, and by kicking the ball and just hitting the goal-posts, without the ball actually passing between them. These behind points are shown as the middle number in the final score, which brings us to our next point.

This is how you might see a final score in Aussie Rules – 10.12.72. As stated above, the first number indicates the number of goals scored – calculated as 10 x 6 for this example, giving 60 total points. And then the second number shows the points scored from ‘behind points’, which has the face value given in the final score. Therefore, you add the total from the first number to the middle number, which gives you the final score indicated on the right.

In terms of the actual players on the pitch, there are 18 for each team. 15 players will be on the pitch for a team at any one time, and there will always be 3 substitutes on the bench who can be brought in at any time. So, coming back to the 15 guys that are on the pitch for each team, they will be organized in five separate rows of 3 players. Of course, each row has its own role in the team, which is discussed in the next section. But for now, you simply need to know that the five rows of 3 players are split into a left, central, and right side role.

Of the five different rows for each team, there are different roles for each line. These are split into half and full forwards, half and full-backs, and the centre-line. The full-backs are there purely to defend the goal, whereas the full forwards are there purely to score goals. Then for the half positions in terms of backs and forwards, these guys will fulfil their respective duties while trying to integrate with the centre-line as much as possible. As for the centre line guys, of which there are 3, they will try and hold possession, recover the ball from defenders, and pick out passes for the forwards to score goals – it is by far the most versatile position on the field.

We couldn’t wrap this up without discussing some of the more exciting Aussie Rules teams that currently compete in the AFL. After all, if you are feeling stimulated to watch some games after reading this, it helps to know where to begin! Therefore, check out the teams mentioned below to see where the real action lies:

These guys are currently at the top of the AFL table, and with good reason. Melbourne Football Club plays a very attacking style, constantly putting pressure on the opposition with clever passes and sheer brute force at times. Of the 12 games they have played all season (at the time of writing), they have managed 11 wins and just 1 loss – not too bad, right?