Off the back of consecutive winless games, Adelaide makes the next league attempt in their home stadium where they host Macarthur. The Bulls enter the field after adding three more points to their tally.

United to tame the Bulls

Starting with H2H games, the home side between these teams has been able to dominate the visitors in all duels. Adelaide United registered two victories in the last four home outings. Macarthur got a much-awaited victory previously in the home attempt but the Bulls’ don’t have a decent away record recently. The visitors are struggling for a win far from home from the last five outings. So we back the hosts to take the home advantage

High scoring affair to kickstart Round 23

The teams have faced each other three times and ended all of them in high-scoring totals. Adelaide United have been unable to get a huge total of numbers recently but managed to give six goals in the last five home games. While Macarthur hit the target 11 times in the same number of overall outings, scoring at least two in four of them. Given that, we expect the previous trend of high totals to be continued in this game.

Adelaide United vs Macarthur: Check out the best odds and the latest stats

Adelaide United vs Macarthur: Check out the team lineups

The Reds got their second home defeat in a row previously against Melbourne Victory by giving an early lead of 0-1 in the seventh minute. Adelaide United collected only one point in the last four A-League outings and are dropped to the sixth position, having 28 points. Nick Ansell will be out of the game due to his injury.

The Bulls had consecutive three winless games recently but made a step up with the previous victory to stay at third in the points table. Macarthur were down to 0-2 in the early minutes of the last game but bounced back to win 4-2 at the end. The club manager Ante Milicic enter the field with a fully healthy squad available for the next game.

Questions About Adelaide United vs Macarthur 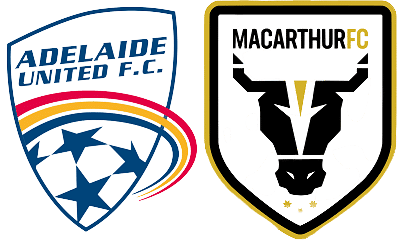